I have countless memories of the fun, crazy and challenging moments of working at the WPA.  Perhaps the time that encapsulates a smorgasbord of all that is wpaesque, was when we took over the former Staples store on M street in Georgetown and created a 10,000 square foot pop-up gallery. From the fall of 2005 through the spring of 2006, we staged three exhibitions:  OPTIONS 2005, Post Secret, and Wall Snatchers.  The space became the WPA staff ’ s home away from home.  Here are three behind-the-scenes vignettes, one from each show. END_OF_DOCUMENT_TOKEN_TO_BE_REPLACED 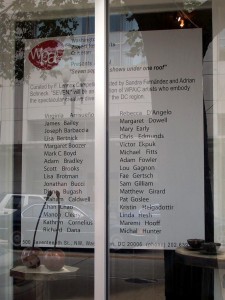 My own experiences with the WPA have been terrific and go back many years. But clearly the most important one was in 2005, when I had perhaps the most difficult and most fun curatorial job ever. This happened when I was retained to curate the massive “Seven” exhibition for the then WPA\Corcoran. My goal in curating the show was to expose WPA artists who rarely, if ever, got any attention from previous curators and pair them up with some well-known names. In order to do that I reviewed 24,000-plus slides in the WPA\C Artfile, plus about a 1,000 digital submissions – the first time that the WPA had used digital entries for a show! I reviewed all those slides and files not once, but twice over a six month period of trips to the Corcoran, where the WPA lived at the time. END_OF_DOCUMENT_TOKEN_TO_BE_REPLACED

On The Jade Garden/Artists’ Apartment

In 1985, executive director Jock Reynolds commissioned, with the assistance of a Special Projects Grant from the National Endowment for the Arts, artists David Ireland and Robert Wilhite to convert an 800-square-foot space in the WPA galleries in the Jenifer Building on 7th Street into living quarters for artists-in-residence and visiting scholars. END_OF_DOCUMENT_TOKEN_TO_BE_REPLACED

When Alice Denney founded WPA in 1975, she managed to achieve what for most would have been impossible: she successfully negotiated with the City of Washington’s Redevelopment Land Agency, to rent a three-story building in the heart of downtown for a mere $1 per year. Albeit dilapidated, the space at 1227 G Street NW was large enough to easily accommodate the broadly conceived programming that Denney envisioned for WPA – visual arts exhibitions, theatrical and musical performances, film and video, service programs for artists, and receptions celebrating the arts – while providing sufficient accommodations for the staff. The space was renovated under Denney’s direction, on a shoestring and pegboard budget, and provided a means for WPA to thrive until 1982 when, with director Al Nodal at the helm, the city sold the building to revitalize the G Street corridor and add a metro stop. WPA was evicted and the building was later demolished. END_OF_DOCUMENT_TOKEN_TO_BE_REPLACED

In 1981, WPA inaugurated Bookworks, a store that celebrated the emergence of artists’ books.  Inspiration for Bookworks came from The Book Bus, a mobile bookstore from Visual Studies Workshop in Rochester, which traveled across the Northeast to bring independent literature, including small press publications, poetry, and artists’ books, to the public. WPA was among its regular stops. Concurrently, under the leadership of Al Nodal, WPA hosted Artists’ Books USA, a traveling exhibition that included books by over 135 artists from across the country. In March of 1980, WPA hosted an exhibition of books by Washington-area artists curated by H. Terry Braunstein. WPA staff member Susan Strauss simultaneously assembled a small collection of books for WPA, which Nodal admired.
END_OF_DOCUMENT_TOKEN_TO_BE_REPLACED