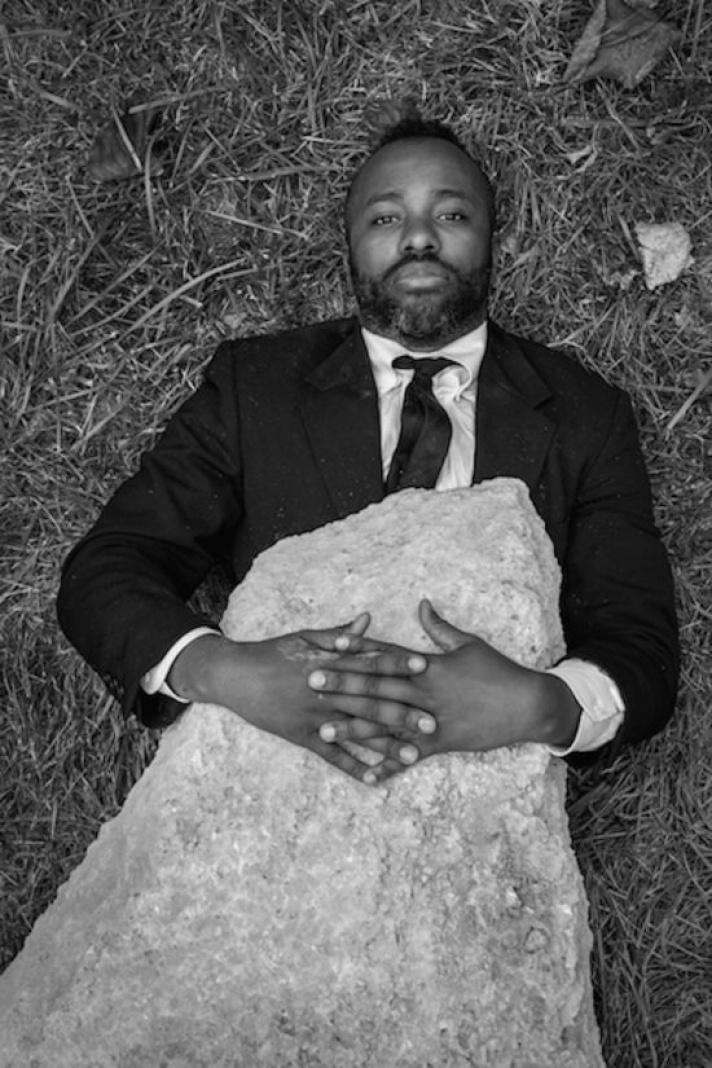 The black body lies in repose on a bed of grass and straw, eyes gazing directly at the viewer.  The countenance is serene, the body adorned in the trappings of success and respectability.  The sense of calm is belied by the concrete block, literally pressing the black body down against the earth.  Fingers fold over one another in a relaxed embrace of the block creating the sense that the body is acquiescing to the load bearing down.  The eyes say otherwise.  The eyes draw you in—defy you to test the weight yourself.  And in that moment, Sheldon Scott has you in his proverbial grasp.  Scott’s pictorial performance Self Portrait as John Henry (Man) pulls you in and starts a dialogue that may cause very real discomfort for many, even as it suggests a possible catharsis in the end.  What I thought would be standard interview with this storyteller turned performance artist quickly transitioned into an honest probe of this discomfort as Scott dismantled the invisible fourth wall between the observer and the observed.

Nominally, the artist’s focus is on the nexus of race, sexuality and economics.  But to discuss his work solely using those terms is too academic; he won’t let you couch his work so obliquely.  “Using the platform of blackness… my black body is a canvas,” to deeply delve into the intersection of blackness, gayness and poverty he matter-of-factly states.  His life history provides ample fodder to shape his narrative.  He was born and raised in rural, coastal South Carolina, steeped in Gullah culture which traces its heritage to the descendants of African slaves and includes both a distinct cultural identity and English vernacular.  He also experienced poverty first-hand, growing up in a mobile home with spotty utilities and rather large hole in the floor.  He tells me these things not out of a desire for sympathy but to tacitly acknowledge the fact that our childhood histories inevitably resonate through adult lives. 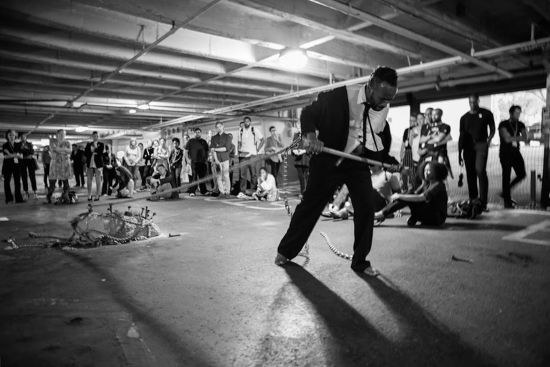 Level With Me, part of the Folk’Lore Project
Performed at the 2013 (e)merge art fair, Washington, DC
Photo Courtesy of the artist.

Artmaking has not necessarily been a scholarly pursuit; Scott’s Bachelor’s degree is in psychotherapy, but the art of storytelling is in his bones.  Storytelling was the way his ancestors (both modern and centuries past) communicated, maintaining their culture within a larger environment that did not value their contribution to society, or even their very bodies.  What started as a passion for storytelling segued into the realm of theater in 2007 when Scott took to the stage at the Capital Fringe Festival in the rather pointedly-titled Faggot; The Play.  While further Fringe Festival performances cemented his desire to perform, they did not necessarily allow him to fully explore this idea of using the body as a canvas.  In other words, a strictly theatrical event, though performative in nature, did not in and of itself create the emotional dialogue between viewer and performer that he desired.  A new path was needed.

Scott has successfully charted that path with a performance-based, artistic paradigm designed to break down the invisible fourth wall between actor and viewer.  In Scott’s world, the viewer is no longer allowed to passively gaze, but is pulled into the emotionally-charged environment and forced to acknowledge their discomfort.  While his first performance under this model dates to 2012, Scott notes that a performance-based platform allows the artist to move across media, and he has since added photography as well as sculptural-based installations to his repertoire.  All these disparate elements feed into a meta-narrative designed to investigate the question of, “how do we deal with the race that we’ve created.” 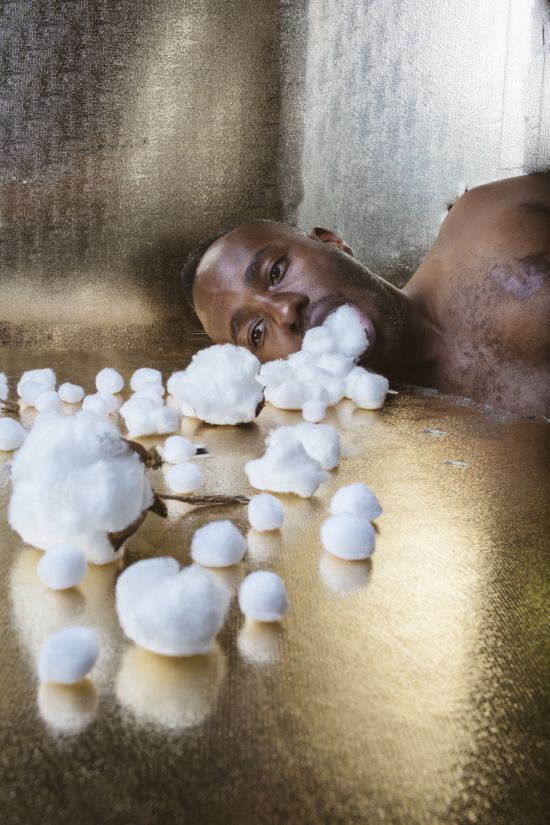 Our conversation delves just as deeply into politics as it does into art; indeed the two seem almost inseparable in a body of work that poignantly resonates against the backdrop of our 24-hour news cycle.  The artist notes that “performance has an ultra-contemporary feel to it [and] can push the conversation in a way,” that is different from theatrical works or static art.  And while that idea of “dealing with race” is contemporaneous, Scott’s performances weave through the historical fabric of our national identity, underscoring the notion that we cannot fully comprehend our present circumstances without fully acknowledging their historical roots.

This idea of meta-narrative can best be summed up by Scott’s Folk’Lore project, an ongoing “exploration of mythologies of American Blackness through story, song and riddle” which adds a unique contribution to the growing field of performance art with its injection of distinctly historical elements into a modern artistic arena.  Performances, such as his 2013 Level With Me (part of the (e)merge art fair’s performance platform) test the limits of his physical body, casting the artist’s body as more robotic than human in repetitive tasks involving the movement and leveling of a plot of dirt.  This notion of human-as-cog is further elucidated in the separate photographic series Self Portrait as John Henry where Scott uses the folklore surrounding John Henry’s famous victory against a steam-powered hammer that subsequently ended in his death.

The mythology around John Henry can take several forms, but Scott is most interested in investigating how, historically, the objectification of the black body reduces the body to a mere mechanical tool.  The wholesale reconstituting of the black body as a machine—stripping the body of its humanistic elements—required not only the cultural buy-in of our ancestors, but also the direct participation of our governmental systems.  In this regard Scott presents a biting critique of how our social order came to fruition.  But also heavily alluded to within this critique are the reasons why this subjugation was “necessary”:  it was specifically designed to undergird an economic order that championed maximum profits with minimal labor costs. 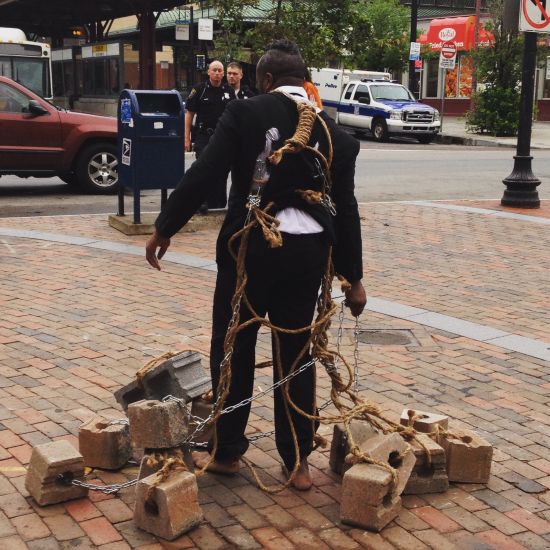 Of/From, 2015
Performed in Boston, MA.
Photo courtesy of the artist.

The performances are “experiments” designed to test the limits of the human machine yet in the end inevitably fail, since in the end black sinew and black bone can never spontaneously transform into steel.  Scott regularly introduces variables into his experiments, such as a recent performance in Boston titled Of/From where the mechanization of the artist’s body required him to drag concrete blocks down the sidewalk.  Though variables differ, the façade remains the same:  the artist performs in a black suit, white shirt and black tie.  Here the artist toys with the idea of respectability, noting how the suit epitomizes the idea of black success, but as the performance plays out, that suit becomes sullied and eventually tattered.  Taken to its extreme, it suggests that the black body is “worth” more at precisely the moment it begins its downward trajectory towards mechanical failure.

Scott has an unusual way of slipping between first and third persons as he discusses his work, interchanging “I statements” with clinical descriptions of the black body.  I can’t help but wonder if this slippage between modes of speech parallels the dual frames of mind required for the artist to sublimate his own ego to operate within the performance space.  For this is not solely a caricature the artist is distilling from multiple, outside sources but a very real summation of personal observations; when he describes for me how performances touch upon “the permanence of black suffering,” he is not speaking in the abstract.  Yet the beauty of the performance (if it can be couched in that term) is the dialogue it engenders between the artist and viewer.  As an artist, Scott asserts he is in a unique position to create a dialogue that intentionally moves past sympathy to empathetic awareness, a criterion notably missing in our current national debate.

Scott continues to expand his explorations in new directions, such as his recent performance work Male Polish which investigated the cultural norms surrounding masculine identity against the backdrop of a football practice session.  This fall he performances scheduled at the Creative Time Summit in October, the National Portrait Gallery in November and a unique, city-wide “campaign” to be the District’s Minister of Culture.  With a two-month duration and multiplicity of settings, this may be his biggest performance to date.  Produced in conjunction with the Washington Project for the Arts, the goal of the campaign is not a landslide victory (the position is fictitious), but rather a multi-faceted examination on the power of the arts and arts community to act as a catalyst for social and political change.  He even has a campaign website; visit it here to learn about his platform, pick up some campaign swag, or even join his super PAC!