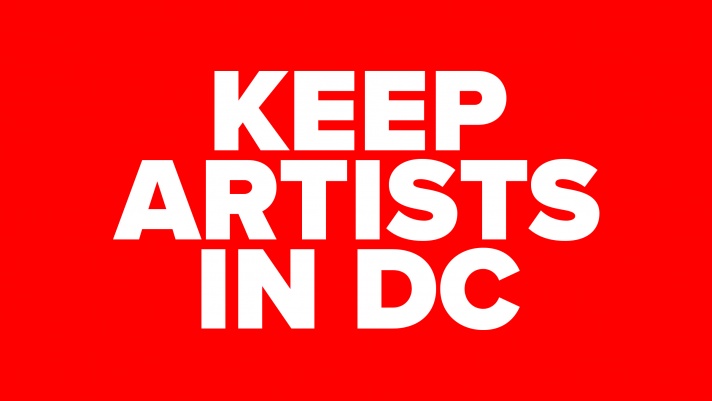 A week ago today, we helped to circulate a petition under the headline "Keep Artists in DC". We are in full support of this effort. The petition is addressed to the Mayor's Office, the City Council, the Office of Planning, and the DC Commission on the Arts & Humanities. Its focus is the current draft of the Cultural Plan. As of this morning, there were more than 1,000 signatures.
Why petition the stewards of the Cultural Plan? At least the city is writing one, right?
The reason is simple. DC as we all know is undergoing profound socio-economic changes, and DC's artists are among the populations most affected. Cultural plans in other cities undergoing similar changes (e.g. Boston and Chicago) make the retention and/or attraction of professional artists a primary goal. The DC Cultural Plan doesn't. Instead, it sets its sights on what it calls "cultural creators," which it defines as "people and organizations that produce cultural expressions." Under a banner of egalitarianism, it goes further to describe cultural creators as "students in school, hobbyists, cultural entrepreneurs and anyone who creates" (p. 7). On one level, this is great. People should be encouraged to live creative and imaginative lives. But the Cultural Plan devalues the work of hard-working professional artists to such a degree that it seems to be telling them: move to Baltimore, move to Los Angeles, we don't care.
We think the DC government can and should do better. We would love to see a rewritten plan that puts value on professional artists. We'd like to see a plan that gives more than just tax-breaks to developers who set aside space for culture in their planned unit developments. We'd like to see a plan that actually supports artists directly. Many other city's cultural plans do that. Boston's, for example, includes fellowships, cultural exchanges, mentorships, and jobs. They are working hard to retain their artistic talent. We should too.
The petition exists to prove to the city just how many voters care. 1,000 signatures is a start but it isn't enough to get the city's attention. This is DC's first Cultural Plan. The time to speak up is now.
Please join us by signing the petition today.
yours,
Jordan, Nathalie, and Peter
Best jordan SneakersVSCT Clubwear Herren Jogginghose MC Nylon Striped in orange 767719

News
Washington Project for the Arts