Meet the Artist Running for State Rep in Rural Pennsylvania 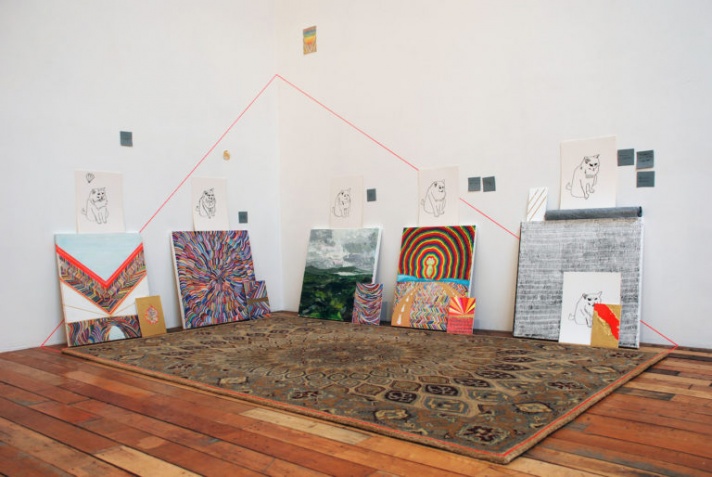 We are thrilled to welcome Kate McGraw to WPA this Thursday for which is sure to be a wonderful conversation about the convergence of art and politics. Check out this great interview with Kate...

I always remember Kate McGraw’s artworks as a colorful sprawl of integrated textures — equal parts playful, abstract, and socially aware. During an open studios event at Brooklyn College, when she was a Master’s candidate in Fine Arts, McGraw’s studio stood out from her cohorts’ by being a work of art in itself; her walls were meticulously stenciled over, creating a grid-like lace of iridescent hues. Readying a space where art could emerge, she said, was as important as making individual works of art. Now she’srunning for State Representative in Pennsylvania’s 92nd legislative district, applying a similar methodology to the campaign trail.

The regional issues that most affect voters in McGraw’s district are agricultural and educational. The area is predominantly rural, comprised of Cumberland and York counties in southern Pennsylvania, and boasts a wealth of public schools. McGraw, running as an Independent for the newly opened seat, is hoping to appeal to both Republicans and Democrats, while her opponent, Dawn Keefer, is running on the Republican ticket. With only two candidates on the ballot, could the election turn into a showdown? McGraw’s opponent bills herself as a businesswoman, but McGraw has over 14 years of experience as the independent proprietor of a successful studio practice.

I recently spoke with McGraw via Skype, inquiring into the particulars of her platform, her political inspirations, and how her campaign for State Representative of Pennsylvania could be considered a work of art.

Jeffrey Grunthaner: What are some of the issues you’re addressing in your campaign?

Kate McGraw: My platform focuses on agricultural issues, preserving our farmland; also, keeping our educational system healthy. Having grown up and spent 22 years here, I left Pennsylvania really proud of the public education I received. It’s the foundation of where I come from, and it’s really helped me through my art career. I think that’s probably why I started this campaign. To see our public education system in Pennsylvania under attack is something I can’t stand for.

JG: In your artistic practice you have a blog that’s devoted to agriculture…

JG: Does your campaign relate in any way to the Chouffe Mountain Farm Project? 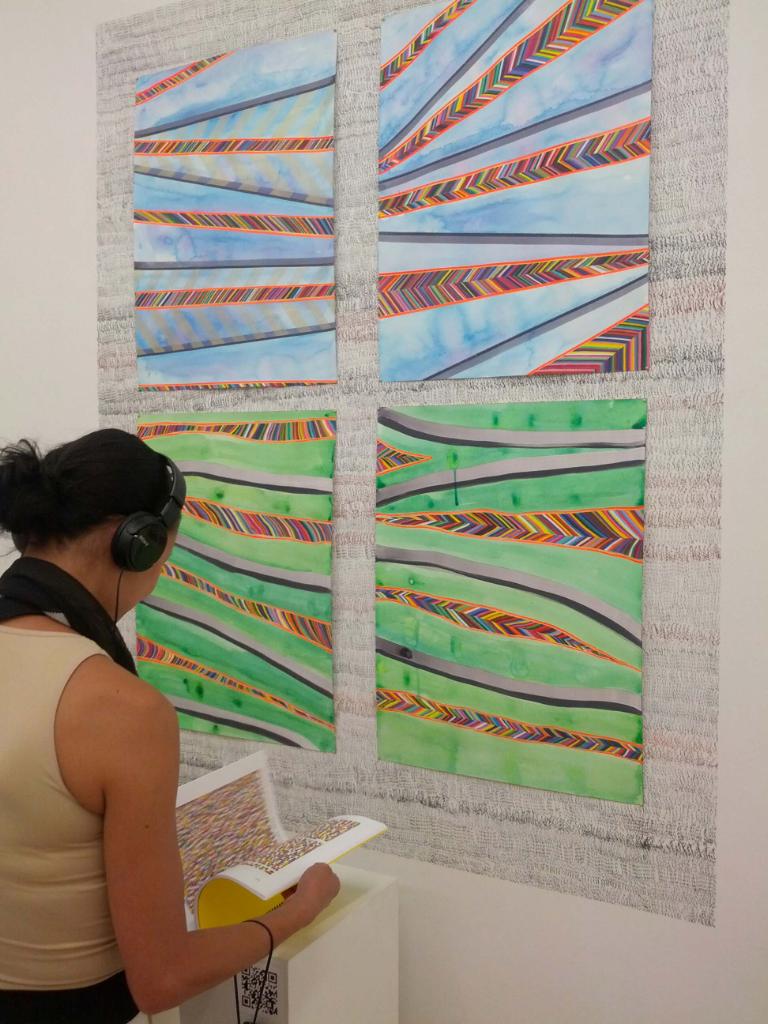 KM: Chouffe has been a muse for me even since I’ve been her caretaker. She’s kind of a miracle cat. And then to bring in the election side, animal rights are a huge issue in my district and in Pennsylvania. There’s a lot of wonderful work being done, especially in my district, with rescue organizations that are huge advocates for animal welfare. So bringing Chouffe into the mix here seems like a really natural place to go. People love their pets. Animals are really important here, and she’s a great inspiration.

JG: Running as an Independent, your candidacy kind of comes out of the blue. You had to petition to become a candidate, right?

KM: That’s right. The primaries in Pennsylvania are closed to Democrats and Republicans only. Independents and third-party voters don’t have the ability to vote for candidates in the primary. Since I’m an Independent, I have to go through a different process, which is a nominating process. In order for me to get on the ballot I needed 359 signatures from registered voters in the district. And in order for me to really hit that goal I doubled it. I made sure that I was getting the required numbers, but it was also a great way to have a goal in visiting more people. I finished my nomination papers with about 765 signatures. Now, the official list has been released and I’m on it.

JG: Who are you running against?

KM: There’s one Republican on the ballot. Her name is Dawn Keefer and she won the Republican primary. She won with a fairly slim margin. There were a few Democrats that chimed in to run as a write-in, but they didn’t receive the number of write-in votes they needed for this seat. So I’m running against one person.

JG: Where would you say you lie on the political spectrum?

KM: I’m really for a middle ground. In Pennsylvania we have a very polarized legislature. My goal is to not bring radical change in a short amount of time. What I’d like to see is a slow move toward negotiation and compromise from both sides. I grew up here and … it’s an area that is predominantly Republican. It’s historically been that way. These people are my neighbors, they’re my friends, and I absolutely adore them. What I’d like to see is more of an open dialogue about the issues that really matter to people who live here.

JG: What are some of the uses and abuses of social media platforms for grass roots campaigning? 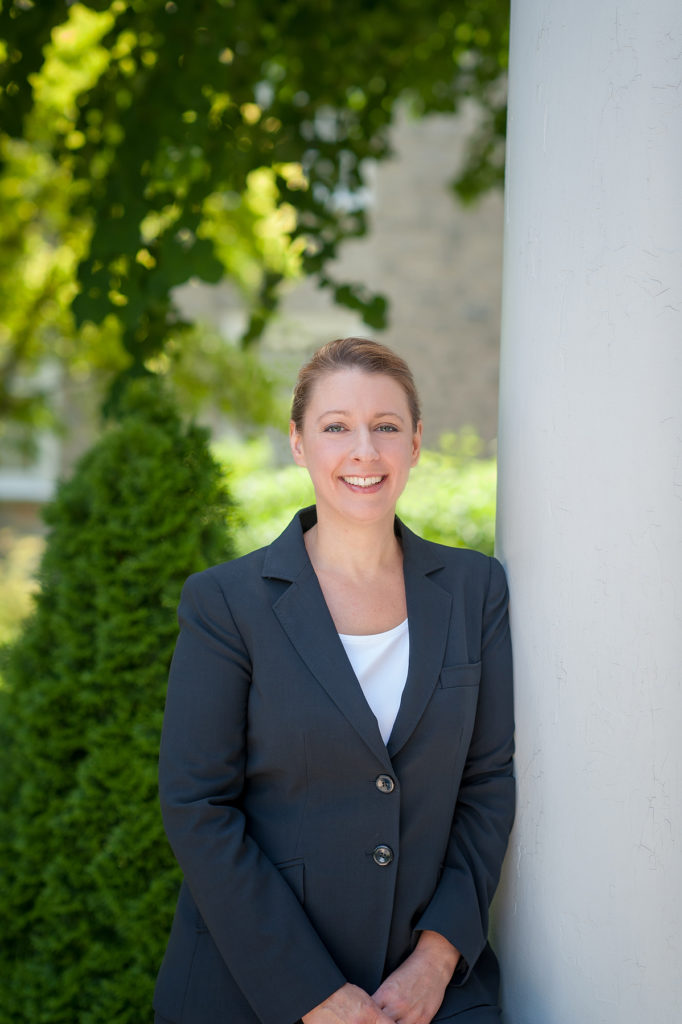 KM: Social media has its limits, in that you’re not necessarily targeting a specific audience: you’re really going for that broader audience. I have to focus on reaching my constituents in the 92nd district — and not everyone has great internet access, not everyone is on their computers all the time. People are busy; they’re working, they have families, so sometimes it really does require knocking on someone’s door and talking to them. My campaign is going to be a combination of social media presence — which is a great platform for artists, so I do feel comfortable there — and marrying that with really reaching out to the voters and meeting them one on one.

JG: Is the fact that the people you’re appealing to by and large don’t own or use computers a class issue?

KM: I don’t think it is. Sure, there’s always going to be the economics of technology ownership. But I think the issue in the district is that there are a lot of people who are of retirement age. There’s an age gap in social media use. I want to make sure that I’m reaching people who are elderly, who might be not as hooked into Twitter or Facebook or Instagram. I would say that, to really reach people, the safe bet is the newspapers and the television stations around here. It’s a slower pace of life. There isn’t a huge need to be online all the time: people are out in their gardens, or picking their kids up from school. I have to take those things into account.

JG: You also have a position on opiate dependency.

KM: My platform items do include working to conquer the abuse of opioids and dependency. I also have a platform of expanding industrial hemp in Pennsylvania as an agricultural crop, so people can generate income. As far as opioid abuse goes, I’m still researching how to address such a massive issue. We have heroin abuse, we have prescription drug abuse — we also have the fact that people are in pain and need pain relief. Decriminalization of certain drugs is definitely a step that can be taken to alleviate the criminalization of addiction. Addiction is not a crime. For people to go to jail for being addicts, for being alcoholics, that’s a crime to me. Of course, it comes to back to education, educating people what their options are.

JG: Is it fair to say that the way you’re setting about this campaign has its roots in what you do as an artist?

KM: I don’t really divorce my art from my life. They’re combined, so the art is always a part of everything I do. I think that’s a huge strength, especially for a political campaign, because there are elements that aren’t just a person speaking in front of a microphone, or going door to door. You have the visuals. You have the texture of a language, and the cohesiveness of a campaign, like logo design and color choices. I’m really tuned into that. My goal is to bring a campaign to fruition that has a beauty to it, a real kind of wholeness.

JG: Why didn’t you opt for a more “arty” campaign design? 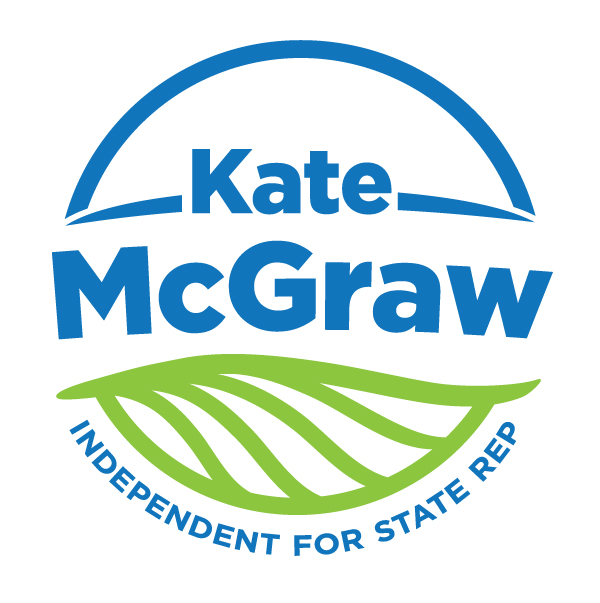 KM: The art-making part has to mesh in a certain way. I wanted the design of the logo to evoke the region. I’m very inspired by place, and wherever I go, wherever I live, the place that I’m in is usually the real inspiration for the work that I make. Now that I’m back home it makes sense to make a logo that speaks to our beautiful open green spaces and big blue sky. You don’t get that everywhere. I wanted the logo to really bring people to the space we are in and the place that we live.

JG: What do you think of the visual identities of Hillary and Trump?

KM: The Hillary arrow pointing right is really intriguing. Donald Trump, he’s old school. He’s using the texture and the structure of the Trump logos from his business. You know, the whole etched-in-stone or engraved-in-gold typography. The fonts he uses are very stripped down, clean, and bold. Something about that simplicity is really resonating right now.

JG: Would you say you’re able to implement design elements that people who aren’t artists might not think about?

KM: Being and artist I think about every little detail. I want to be accessible and I want people to really feel considered with the design. I don’t want the design to fly in anyone’s face or be visually challenging. I want it to be visually calming and optimistic.

Color choices were definitely well thought out. I wanted to have a campaign logo that wasn’t overtly political, but I also wanted campaign signs, so they have to have some political element. I use the blue of the sky as a political color, like the red white and blue. I wanted to draw them [voters] with blue … something that really resonated with place. Adding green makes so much sense because of our green pasture land here. It’s green for most of the year and it’s quite beautiful. I think of my campaign as having fresh idealism, the optimism of spring or that really wonderful rejuvenating light green color of young plants. So there was a real function to the logo. In the end I want people to vote for me.

To learn more about Kate McGraw’s campaign, check out her Crowdpac page.