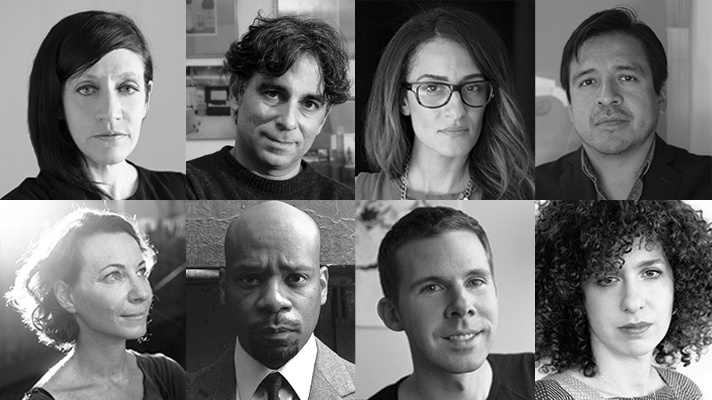 Ellen Altfest received a BFA and BA from Cornell University, an MFA from Yale University School of Art, and attended the Skowhegan School of Painting and Sculpture. Altfest has had one-person exhibitions at The New Museum, New York, Milton Keynes Gallery, England, and The Chinati Foundation, Marfa, Texas. Her work has been included in many national and international group exhibitions including in the 55th Venice Biennale, The Encyclopedic Palace, curated by Massimiliano Gioni, the Royal Academy in London, Kunstforeningen GL Strand in Copenhagen. Altfest received a 2012 Guggenheim fellowship, and a Richard and Hinda Rosenthal Foundation Award from the American Academy of Arts and Letters. In 2016, she was a Hirshhorn Museum honoree. Altfest lives and works in New York.

Deana Haggag is the President and CEO of United States Artists in Chicago. From 2013 to 2017, she was the Executive Director of The Contemporary, a nomadic and non-collecting art museum based in Baltimore. Prior to her work with The Contemporary, she was the Curator-in-Residence at Gallery CA, Baltimore, in the City Arts building, which is home to over 90 artists. She is on the board of the Greater Baltimore Cultural Alliance and the council of Common Field. She received her MFA in Curatorial Practice from the Maryland Institute College of Art and a BA from Rutgers University in Art History and Philosophy.

Omar López-Chahoud has been the Artistic Director and Curator of Untitled, Art since its founding in 2012. He is an artistic advisor to Prospect4, New Orleans (2018) and serves on the Bronx Museum Acquisitions Committee. As an independent curator, he has curated and co-curated numerous exhibitions in the United States and internationally, among them the 2014 Nicaraguan Biennial. López-Chahoud earned MFAs from Yale University School of Art and the Royal Academy of Art in London.

Linn Meyers earned her BFA at The Cooper Union, New York, and MFA from California College of the Arts, San Francisco. She has had solo shows at museums throughout the US, including The Hirshhorn Museum, Washington DC; The Hammer Museum, Los Angeles, CA, The Westmoreland Museum of American Art, Greensburg, PA; The Phillips Collection, DC; The Huntington Museum, Huntington, WV; The American University Museum at the Katzen Arts Center, DC; The Academy Arts Museum, Easton, MD; The Frick Museum, Pittsburgh, PA, and The New Britain Museum, New Britain, CT. Meyers’ work has been exhibited in group shows in the US and abroad, including exhibitions at the Tokyo Museum of Art, Japan, Bus-Dori Projects, Tokyo, Japan, Paris Concret, Paris France, The Sheldon Museum, NE, The Mattress Factory, PA, The Weatherspoon Art Museum, NC, The National Museum of Women in the Arts, DC, and The Drawing Center, NYC. She has received numerous awards including the Smithsonian Artist Research Fellowship (2009), Artist-in-Residence at the Ballinglen Arts Foundation, Ballycastle, Ireland (2016), Artist-in-Residence at the San Jose Institute of Contemporary Art, CA (2009), Artist-in-Residence at the Hirshhorn Museum and Sculpture Garden, DC (2007), Artist-in-Residence at the Tamarind Institute, NM (2006 & 2015), Pollock-Krasner Foundation Grant (2001), and several grants from the DC Commission on the Arts. Meyers is represented by Sandra Gering Inc, NYC.

Jonathan Monaghan (born 1986, New York) works with animation, prints and sculpture. His works are dreamlike explorations of fear and desire in the digital age, critically examining issues surrounding wealth, consumerism, authority and technology. Past exhibitions and screenings of his work include The Sundance Film Festival, The Minneapolis Institute of Art, The Hirshhorn Museum, and The British Film Institute. His work has been featured in several media outlets including The Washington Post, VICE, The Wall Street Journal and The Village Voice. Monaghan is represented by bitforms gallery in New York and Galerie 22,48m2 in Paris.

Jefferson Pinder’s work provokes commentary about race and struggle. Focusing primarily with neon, found objects, and video, Pinder investigates identity through the most dynamic circumstances and materials. Through his meditative exploration with light and sound or his intensely grueling corporeal performances, he delves into conversations about race. His exploration of physical performance are conceptual threads to examine history, cultural appropriation, and portrayals of exertion and labor. Creating collaged audio clips and surreal performances he under score themes dealing with Afro-Futurism and endurance.

His work has been featured in numerous group and solo shows including exhibitions at The Studio Museum in Harlem, the Wadsworth Athenaeum Museum of Art in Hartford, Connecticut, Showroom Mama in Rotterdam, Netherlands, The Phillips Collection, and the National Portrait Gallery in Washington, DC. At present, Pinder is preparing for the 2016 Shanghai Biennale, and has just finished a sculptural installation at the new Smithsonian Museum of African American History and Culture. Pinder resides in Chicago where he is a Professor in the Sculpture department at the School of the Art Institute of Chicago.

José Ruiz is a Peruvian-born artist and curator who lives and works between Washington, DC, Baltimore, and New York. Over the past fifteen years, he has mounted exhibitions and curatorial prompts for cities, museums, biennials, non-profits, galleries, and art fairs. These projects have taken place in street corners, community centers, universities, abandoned warehouses, creative incubators, and commercial spaces, both at the national and international level. His practice has been the subject of various publications, including The New York Times, The New Yorker, The Wall Street Journal, ARTnews, ArtReview, Arte Al Día, Artnet, and The Washington Post. He is the founder of Furthermore, a post-studio research, design, and production lab operating out of Washington, DC and Brooklyn, and a partner and co-director at Present Co., a New York-based gallery and curatorial collective. He currently serves as Director and Faculty in the Curatorial Practice MFA Program at the Maryland Institute College of Art in Baltimore.

Sarah Stolfa is the Founder and Executive & Artistic Director of the Philadelphia Photo Arts Center. Stolfa is an artist and educator with a broad range of experience in education, curatorial work, program development, administrative oversight, and digital lab creation and management. She has an MFA in Photography from Yale University School of Art. In addition to teaching at PPAC, Stolfa is an Adjunct Professor at the University of Pennsylvania. Stolfa’s monograph,The Regulars, was published by Artisan in 2009. She has participated in numerous group and solo shows and her work is collected both publicly and privately.