Now More Than Ever reviewed in DIRT 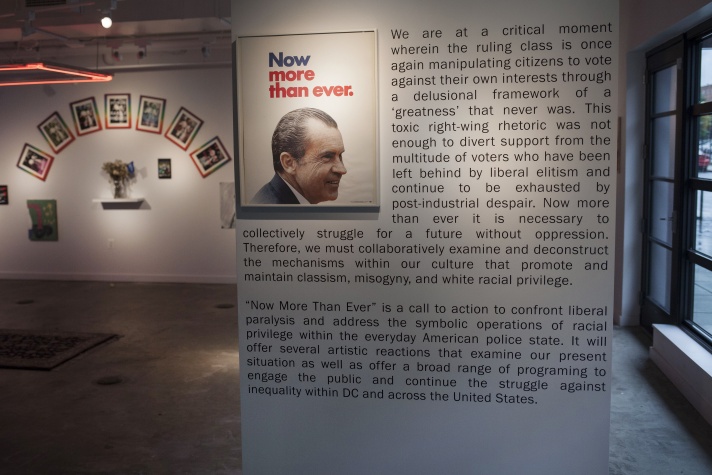 Review: "Now More Than Ever" at Washington Project for the Arts

In the April 1984 issue of Essence magazine, James Baldwin published a short essay entitled “On Being White....And Other Lies.” In reference to “whiteness,” Baldwin stated, “this cowardice, this necessity of justifying a totally false identity and of justifying what must be called a genocidal history, has placed everyone into the hands of the most ignorant and powerful people the world has ever seen: And how did they get that way?”.

To state that “Now More Than Ever” critiques our country’s shameful racist past would be inaccurate, since to think that racism is a thing of the past (i.e. post-racial) is to imply that it does not exist, nor thrive, in the present. Our most recently grotesque examples are the murder of Jordan Edwards on the evening of Saturday, April 29 by Dallas police officer Roy Oliver and the news of bananas hanging from nooses on the campus of American University in Washington, DC. On the contrary, the exhibition confronts structures of white supremacy both past and present, traces genealogies of systemic and violent racism, and underlines the fact that it is now more than ever (or dare I say now or never) that we come to terms with, and challenge, the beast we call whiteness.

Upon entering the gallery, the viewer approaches a framed photo of Richard Nixon paired with his 1972 re-election campaign slogan “Now More Than Ever” – from which the show takes its title. The exhibition cleverly re-appropriates the phrase, signaling an altered sense of urgency – one that frames our current state of affairs. Both the photo and phrase collapses the past into the present, noting the distinctive circularity of history; Nixon’s initiation of the “War on Drugs” and mass incarceration led to the imprisonment of nearly 2.2 million U.S. citizens and the militarization of local and state police, themes touched upon by several artists.

Adrienne Gaither, DC-based visual artist, presents several works of differing media. In I Don’t See Color and Nightshift in Blue (Red & Green Deficient) the viewer is presented with two equally sized canvases consisting of nine squares. The first canvas comprises rich hues of blues, greens, and yellows that reference clinical color blindness, while the second is comprised of a spectrum of skin tones, reminiscent of Byron Kim and Glenn Ligon’s collaborative 1993 work “Black & White.” Gaither emphasizes the double entendre of “color blind” as it relates to both the clinical disorder and the typical response given by white people to deflect the responsibility of perpetuating racial otherness, a statement that as scholar Nicole Fleetwood writes, “troubles vision.”2 Black subjectivity is seen and unseen, paradoxically knowable yet indistinguishable, hidden in plain sight as a way to assuage the guilt of the white conscience.

Gaither’s book-sized body of work, And Now The World Knows, consists of digital collages – quotes and excerpts from canonical 20th and 21st century authors juxtaposed with “TV color tests screens and iconic archival images.” The images appear over redacted sentences, often whole paragraphs, illustrating a genealogy of censorship, and state-sanctioned suppression, while select passages materialize from within and around the images. Gaither re-imagines the pages of the books as road maps towards a politics of liberation that is inclusive of and attends to the intersections of race, class, nationality, sexuality, and gender. An excerpt from Alice Walker’s 1982 novel “The Color Purple,” reads “We will never have to be other than who we are in order to be successful...We realize that we are as ourselves unlimited and our experiences valid.” Individual and collective liberation is won not through appeasing the oppressor, but by finding meaning and purpose within the margins. Gaither’s vision of an intersectional liberatory politics is further emphasized by the other authors she quotes: Toni Morrison, Zora Neale Hurston, Ralph Ellison, Dee Brown, and George Orwell, amongst others. While the excerpts are critical of the malicious ways in which the media, police, and power are used to suppress, there is a language of hope and collectivity that emerges.

Joseph Orzal, artist and NoMüNoMü co-founder , displays a collection of eighteen marble and granite sculptures, entitled TL;DR (a play on an editor’s abbreviation of “too long don’t read” that indicates that a passage is too long to invest any time into). Inscribed onto the flat surface of each are racist classified ads, court testimonies and class action lawsuits, news stories of housing segregation, and reports of police brutality. Each stone varies in size, shape, and color. The installation is eerily reminiscent of a vandalized graveyard with each stone leaning haphazardly against the wall. Orzal’s work is highly conceptually, yet historically grounded. It's certainly not lost on the viewer that WPA's location holds significance. Housed in an enormous, newly built apartment complex with several restaurants and a Landmark theater, there exists a living narrative of gentrification around the exhibition’s geographic specificity. Not even a block away is Howard University, one of the most reputable HBCU's in the country, and the Shaw, U Street, and Georgia Avenue neighborhoods, all spaces that had a significant impact on the cultural, social, and economic success of black communities in Washington, D.C. Now however, it's impossible to miss the countless white affluent millennials walking their purebred dogs.

The text and images on stone lend a sense of permanency and longevity to what is written. Several of the stones reference the history of eugenics in the United States. One, in particular, is a copy of the 1973 class action lawsuit filed by Minnie Lee and Mary Alice Relf against the federally funded Montgomery Community Action Agency. The two young girls were surgically sterilized by the organization, instead of receiving a long-acting contraceptive drug as was relayed to their mother. The procedure, commonly practiced on poor black women, rendered them completely sterile, effectively robbing the young children of their bodily and reproductive autonomy. Undoubtedly, government motives for mass sterilization are founded on the belief that black women’s sexuality, and reproduction more specifically, must be controlled (a stereotype that finds its origins in slavery). White supremacy, as illustrated by Orzal’s work, seeks to control and surveil every aspect of black existence, leaving no stone unturned. Suspended above are two equally long and level blue neon lights by artist Ani Bradberry. The work’s title, Preventative Patrol, speaks to the state-sanctioned surveillance that black bodies and also bodies deemed non-normative (i.e. disabled, poor, queer, etc) are subjected to on a daily basis.

Artist Justin Poppe’s flower installation, entitled Never Had a Chance to Grow, is a commentary on the lead water crisis still occurring in Flint, Michigan. The sight and smell of the white lilies with baby’s breath are reminiscent of funeral homes and burials, a grim foresight into the fates of many of the families in Flint as the title suggests. Resting in the bouquet is a small blue flag with the words “City of Flint Water Dept.” written in white. The flag is a visual reminder of the local government’s negligent behavior and a larger critique of the state-sanctioned value that is placed on particular lives – it is no mistake that poor, black communities bear the largest burden of the crisis. Most arresting, however, is the fact that the vase contains a small amount of lead-laced water directly from Flint. After visiting the exhibition only two weeks after the opening, the flowers are in a severe state of decay. If water, the element necessary for all life, can incite such horrific destruction, one can only imagine the effects it is having on the bodies of young children and adults both in Flint and across the U.S.

“Now More Than Ever” is a refreshingly poignant exhibition that is both conceptually strong and aesthetically nuanced. The show visually depicts and records the centuries of what I would consider “white terrorism” that has long been ignored in the United States (including the death and destruction white supremacy consistently leaves in its path), and reminds the viewer of the insidiously interrelated ways in which white supremacy reasserts its social, political, economic, and sexual power in forms both invisible and nearly too obvious to perceive. Scholar Peter Erickson, in reference to artist Kerry James Marshall’s paintings entitled Two Invisible Men, writes, “white privilege [is] an unclassified, and therefore unnoticeable, racial category, as though whiteness is above race and therefore racially invisible and immune to accountability.”3 “Now More Than Ever” begins the work of holding whiteness accountable and exposing the ways in which white supremacy relies on classism, sexism, ableism, nationalism, homophobia, and xenophobia to perpetually reproduce itself. The systems of oppression in this country are held tightly together by the collective complacency and deafening silence from the people that benefit the most: white people. It is the white majority that must dissuade themselves of the notion that they have no role to play in the dismantling of white supremacy. It is now more than ever that we put in the work.