Now More Than Ever reviewed in The Washington Post 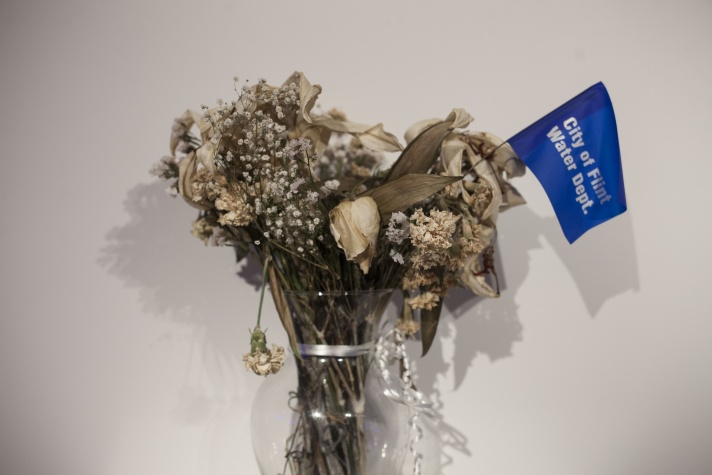 In 1972, Richard Nixon’s campaign pitched his reelection with the slogan “Now More Than Ever.” A local artists collective, NoMuNoMu, has borrowed that motto for its show at Washington Project for the Arts. Neither Nixon nor the current president is a motif, but the work is strongly political.

Although much of it involves text, sometimes the statement is made simply with color. Ani Bradberry’s “Preventive Patrol” is two thin blue lines of neon, and Adrienne Gaither’s “I Don’t See Color” is a hard-edge, color-block painting in pinkish and yellowish shades of “white” skin tones. Aaron Maier uses black fabric to simulate charring on an orange-painted stick, evoking fiery destruction from Aleppo to Baltimore.

Among Justin Poppe’s manga-style illustrations on birch panels is one that depicts drug abuse and police violence; he also contributed a vase of flowers with a pennant that reads “City of Flint Water Dept.” Gaither tore pages from books about oppression, such as “1984” and “The Autobiography of Malcolm X,” concealing most of the content behind photos and bars of color. Joseph Orzal printed words on granite to make the messages look like wisdom of the ancients, but the texts include ads for racially segregated housing and a report on racist police conduct in Ferguson, Mo.