'Sheldon' Wants Your Vote — For A D.C. Arts Office That Doesn't Exist

Listen to the radio version:

Artist Sheldon Scott is one of several people portraying "Sheldon," a candidate for D.C.'s Minister of Culture. The campaign is fake, as is the office. "Sheldon For DC" is a performance-art project orchestrated by a local arts organization to call attention to issues facing arts and culture in the District.

D.C. is missing some crucial elected offices. There are no voting representatives in Congress, for example. But few people have been clamoring for a Minister of Culture. Until today, that is.

“Today, I am pleased to announce my candidacy for Minister of Culture of the District of Columbia,” Sheldon trumpeted in a news release. “I look forward to a campaign guided by rigorous debate, fresh ideas and strengthening support for our creative constituents.”

Sheldon has a three-pronged platform: He wants to invest more money in the arts, support arts education for children and protect D.C.’s native culture. A museum for go-go music is part of the plan.

As sincere as Sheldon’s platform may sound, however, it’s as imaginary as the office for which he’s running. The candidate is actually D.C. artist Sheldon Scott, and his campaign is a performance-art project orchestrated by the nonprofit Washington Project for the Arts. 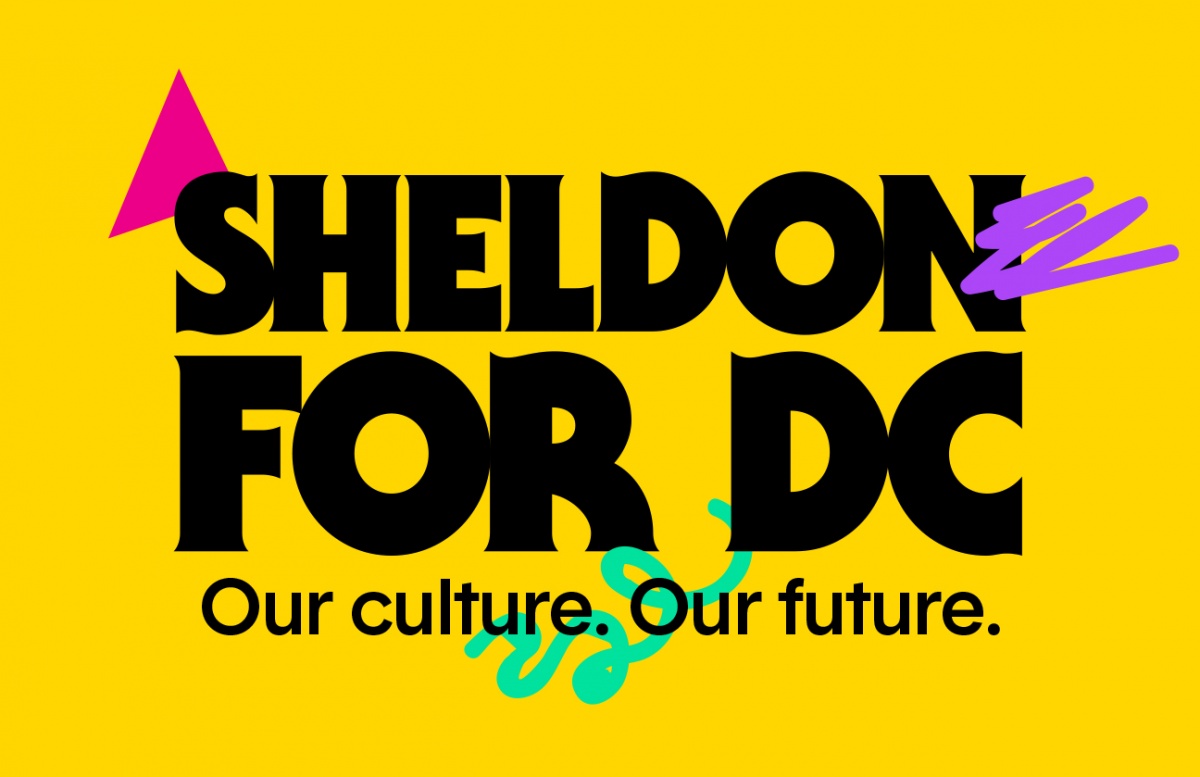 A campaign sign for the (fake) "Sheldon For DC" campaign

In an interview, representatives from Washington Project for the Arts play along.

“When we first heard through the grapevine about the idea of Sheldon running for the [Cultural] Minister of D.C.,” says Washington Project for the Arts Executive Director Peter Nesbett, "we jumped on this right away.”

The organization has made its office in Shaw the headquarters for Sheldon’s campaign. It has produced bright-yellow stickers and signs that say “Sheldon for DC: Our Culture. Our Future.” And the campaign’s official website, Sheldon4DC.org, is taking donations. Give $1,000 or more, and you’re considered a “Super Pac donor.” (Proceeds go to WPA, a 41-year-old organization that operates a gallery and supports contemporary artists.)

But here's where the campaign gets especially artistic: When Sheldon hits the campaign trail, he'll be portrayed by one of several actors. Some days, Sheldon Scott will embody Sheldon. Other days, someone else will play the role, wearing Scott's trademark large glasses.

Scott says he and his stand-ins plan to campaign in all eight wards of the city, asking constituents what matters to them in D.C. arts and culture. They plan to run a strictly old-school soapbox campaign, “1950s-style.”

“We'll get on the back of a truck and pull out a megaphone,” Sheldon says, “and basically shout at the top of our voices what we're here to do.”

What Sheldon is here to do, Scott says, will evolve after conversations with residents. But he seems chiefly concerned with locals who have become disillusioned by the relentless pace of development in Washington. He says there’s a pervasive attitude that the District’s cultural history has been steamrolled in the name of progress.

“When we talk about how the city develops, I don't think that a large part of that equation is cultural,” Sheldon says. “We've given a completely unique musical style to the world” — go-go — and “people need to understand that that legacy still lives.”

Washington Project for the Arts has taken care of details, including stylish campaign swag and a somewhat realistic ballot. Otherwise, Nesbett doesn’t seem concerned about technicalities, including the fact that D.C. already has a top arts official — Arthur Espinoza, Jr. — and that ministers of culture are usually appointed, not elected.

The candidate has assembled a “kitchen cabinet” of stakeholders in arts and business, including Busboys and Poets owner Andy Shallal, Capital Fringe Director Julianne Brienza, musician Kokayi and Gloria Nauden, a vice president at City First Bank of DC.

The campaign officially kicks off Sept. 17 at the Big Chair in Anacostia and concludes on Election Day, Nov. 8. Sheldon is running as an independent, and so far, he's unopposed.