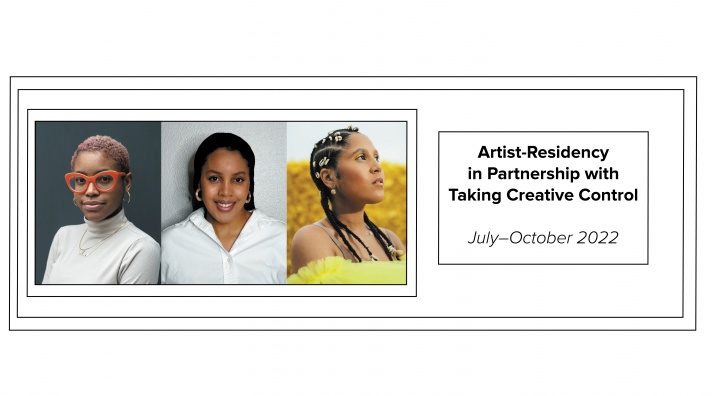 Join us for an Open Studio with our artists-in-residence, photographer Nakeya Brown, musician Cecily Bumbray, and painter Lauren McKinney on Sunday, September 18th from 11am–3pm. This residency is a part of our partnership with Take Creative Control from July through mid-October.

Masks will be required. RSVP here. Details for the event, including the address, will be emailed a few days prior to the Open Studio.

Above images from left to right: Nakeya Brown, Lauren McKinney, and Cecily Bumbray

Nakeya Brown received her Bachelor of Art from Rutgers University and her Master of Fine Arts from The George Washington University. Her work has been featured nationally in solo exhibitions at the Catherine Eldman Gallery (Chicago, IL, 2017), the Urban Institute for Contemporary Art (Grand Rapids, MI, 2017), the Hamiltonian Gallery (Washington, DC, 2017) as well as in recent group exhibitions at ICP (New York, NY, 2022), Silver Eye Center for Photography (Pittsburgh, PA 2021), and The Katonah Museum of Art (Katonah, NY, 2021). She has presented her work internationally at Foto Wein (Vienna, Austria, 2022) and Museum der bildenden Künste (Leipzig, Germany, 2018). Brown’s work has been featured in Insecure, Time, New York Magazine, Dazed & Confused, The Fader, The New Yorker, The Atlantic, and Vice. Her work has been included in photography books: Babe, Girl on Girl: Art & Photography in the Age of the Female Gaze, and MFON: Women Photographers of the African Diaspora.

Lauren McKinney is an abstract painter fighting Retinitis Pigmentosa. In 2019 during the beginning of the pandemic, Lauren was afforded time to be still and focus on family and passions. It was then when she noticed her natural inclination and abilities around painting could be something more than fun. Although she is visually impaired, she continues to express herself and create beautiful works. In 2021, she had works featured in a Chela Mitchell pop up group exhibit and the No Kings Collective's Umbrella exhibition. In early 2020, a collaborative work of hers was featured on the cover of the Washington City Paper and then later traveled to Plain Sight (a street-view gallery) where it was featured in an article in District Fray.

Cecily (pronounced ses-suh-lee) is a DC-based vocalist and songwriter known for her agile soprano and honest lyrics. Her sound is rooted in a deep appreciation for mid-century soul and jazz, 90’s R&B, and re-imagined folk music. Her debut album Songs of Love and Freedom garnered her a 2019 Wammie Award for Best Soul Album and was named "Best New Soul on Bandcamp." Cecily’s 2019 release, Awakening Pt. 1, landed her first SoulTracks Readers' Choice Awards nomination for Female Vocalist of the Year, a 2020 Indie Soul Music Award for Best Female Artist of the Year, and a 2020 Wammie Award for Best Soul Song. The Awakening Visual EP received Grammy consideration for 2020. Cecily has performed multiple times at the legendary Blues Alley and the Apollo Music Café, as well as at The Kennedy Center, The Hamilton, The Howard Theater, and The Mint LA. In 2017, Cecily and her band were invited by the US Embassy to perform in Colombia at the VI Annual Mompox Jazz Festival. She has been featured on BET Soul, BET Her, BET.com, Music Choice, WUSA9, WJLA, NewsChannel 8, DC Office of Cable Television, Film, Music and Entertainment, WBGO, WPFW, and NPR.

About our Partner Organization

Take Creative Control (TCC) is a creator-informed and creator-focused education and advocacy organization building a multicultural community of creator-advocates. Our work is centered on creators of color whose livelihoods depend on effectively sharing, protecting, and monetizing their work. With education, resources, and community convenings, we build power with creators to advocate against policies and practices that impede their ability to tell their stories, compete in the economy, and collectively thrive.