Organize Your Own: The Politics and Poetics of Self-Determination Movements

“Organize Your Own: The Politics and Poetics of Self-Determination Movements” is an exhibition and event series that started in Philadelphia and Chicago in early 2016 and is now traveling to other cities. OYO features new work by contemporary artists and poets that responds to the history of the mandate from the Black Power movement to “organize your own” community against racism.

​For this presentation, Daniel Tucker, curator of the project, will discuss the history of Organize Your Own followed by a Q&A with DC-based artist Amy Hughes Braden about organizing and the politics of race in Trump's America.​ Copies of Organize Your Own: The Politics and Poetics of Self-Determination Movements (Sobsercove Press, 2016), will be available for sale. 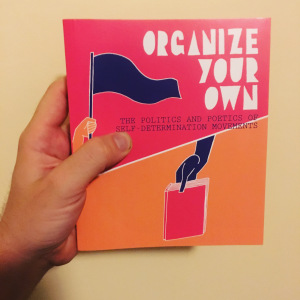 ABOUT THE SPEAKER
Daniel Tucker works as an artist, writer and organizer developing documentaries, publications and events inspired by his interest in social movements and the people and places from which they emerge. His writings and lectures on the intersections of art and politics and his collaborative art projects have been published and presented widely. Tucker recently completed the feature-length video essay Future Perfect: Time Capsules in Reagan Country and curated the exhibition and event series Organize Your Own: The Politics and Poetics of Self-Determination Movements. He earned his MFA from University of Illinois at Chicago and BFA from the School of the Art Institute of Chicago and is an Assistant Professor and Graduate Program Director in Social and Studio Practices at Moore College of Art & Design in Philadelphia. Visit his website: Miscprojects.com