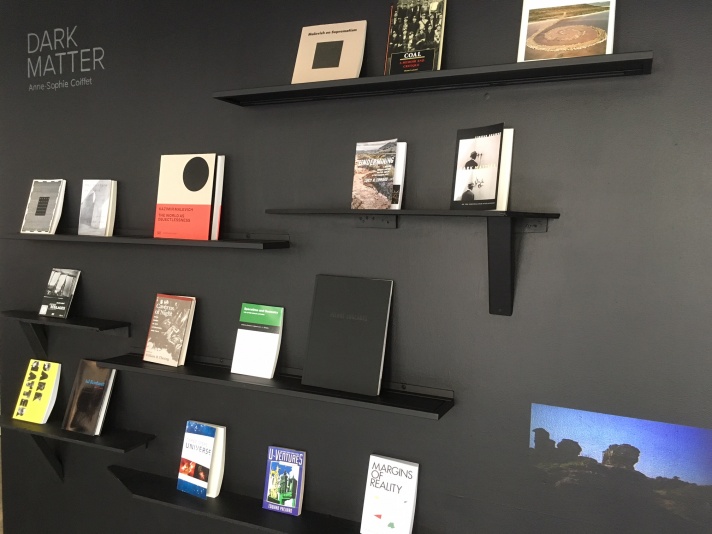 For our second BOOKSHELVES project, we invited French artist and theorist Anne-Sophie Coiffet -- currently based in DC -- to present a curated exhibition of ideas, in the form of books. The subject she chose to explore is dark matter. We sat down with Anne-Sophie and asked her a few questions about her selections before her talk at WPA on Saturday, July 15.

WPA: Why Dark Matter?
Anne-Sophie: I am fascinated by science in general, and specifically by the investigation of the bounds of the universe and the concept of dark matter. Dark matter constitutes more than 90% of the universe and yet remains an unknown. In striving to represent the universe, we continue to run up against a missing and yet tremendously significant element.
Our daily environment is similarly replete with gaps and unidentified phenomena and objects. Visual artists, for example, often use physical materials to fabricate spiritual or abstract ideas. With this selection of books, "dark matter" takes on a plurality of meanings. It refers to invisible matter existing throughout the universe, black paint and pigments used by artists, subterranean landscapes (e.g coal mines and gravel pits), hidden communities, and the psyche.
WPA: Can you tell us about a few of our selections? You've included a book and a DVD about Pierre Soulages, the abstract painter whom the former French President Francois Hollande described as "the world's greatest living artist." Obviously, he is important to you too. How do you see Soulages' work fitting -- philosophically or poetically -- into this exploration of dark matter?
Anne-Sophie: His paintings are known for their intense black depth, yet black paints and pigments are only a part of his work. He has said, "My instrument is not black but the light reflected from the black," which is interesting because we usually think of black absorbing not reflecting light. In fact, black transforms and transmutes light. And in doing so, as Soulages has said, "It opens a mental field all its own." He called his practice Outrenoir (which translates as "Beyond Black"). It involves twin movements: the reflection of the light both on the black surface and on the observer's psyche.
WPA: To stay with this idea for a second -- you've also included a book titled Margins of Reality from the late 1980s. How does that fit into your selections?
Anne-Sophie: Dark matter can serve as a metaphor for the psyche, for the intersection of desire and the human soul. Margins of Reality reexamines the role of consciousness in the perception and the establishment of physical reality. Despite the pervasive growth and development of technology, mystical customs continue to persist. To better understand our physical reality, we must penetrate the surface of psychic manifestations and consider their relationship to both consciousness and the unconscious.
WPA: A few others on the shelf: books on the work of Kazimir Malevich, Robert Smithson, and Roman Opalka, alongside books on the geometrical aspects of spacetime theory and the surveillance of black bodies. And then there are two books on coal. One looks at representations of coal mining in art and literature; another is a personal account of one family's involvement in the coal industry and coal's relationship to corporate power.
Anne-Sophie: My grandfather worked in coalmines for many years in France. During my childhood, I heard stories about his work underground. I also included a related book by the curator and activist Lucy R. Lippard, who has written, "the gravel pit, like other mining holes, is the reverse image of the cityscape . . . it produces extraction in aid of erection."

It is -- for artists and writers -- a risk and a challenge to represent the life and the conditions in these nocturnal caverns. These books examine how local landscapes reflect a global crisis. And in that sense they relate to We Are In Crisis, Winter Count's video shot at Standing Rock, North Dakota and currently on display in the other room at WPA.