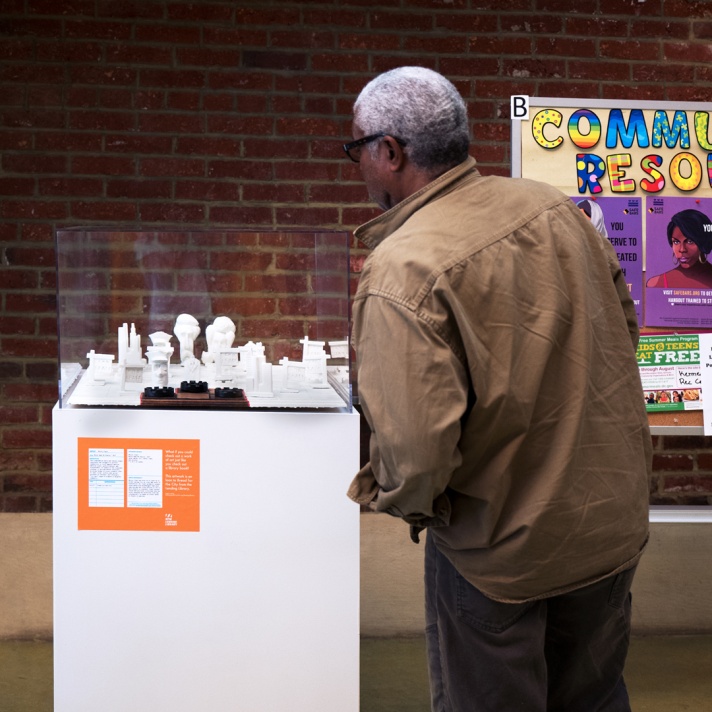 At the Washington Project for the Arts, Beltway Public Works Showcases a Lending Library for Art

The WPA's latest exhibition introduces the idea of art on loan to the public.

Published in the Washington City Paper on October 2, 2017

At face value, there’s an able group show at the Washington Project for the Arts, filled with work that ranges from the aesthetically pleasing, to the conceptual, and the socially relevant. A 55-color lithograph, “Ramble,” by Benjamin Edwards, is a dizzying map exploding with color and shape. Margaret Boozer’s “Red Dirt Print,” a four-foot square patch of dirt, re-contextualizes the ground beneath our feet into an aesthetic object to hang on the wall. Naoko Wowsugi’s “Thank You For Teaching Me English” presents several photographed portraits against high-key color backgrounds: people mouthing English words for the artist to learn (English is her second language).

Though, as a group show, there are some oddities about the presentation. The works rest on a shelf that spans the gallery space. Each work is flanked by a label that is designed as a library checkout card. And beneath the shelf are photos of other artworks whose identities are ascertained from a checklist. According to the checklist, those pieces are labeled as being in certain locations around the D.C. area: A drawing by Mary Early is in a building on the N.I.H. campus; Wesley Clark’s “Which Game We Playin’”—a chessboard-cum-sculpture critiquing gentrification—has a temporary home in the local nonprofit Bread for the City; a combine by Amber Robles-Gordon is currently in the private home of a resident in Anacostia.

This is where things get justifiably complicated for a group show that has little aesthetic or context in common. Especially one that curiously includes pieces that are documented elsewhere. For this exhibition, the art isn’t really leaning against the walls. Those are props to the greater art, which is the idea of a lending library.

Lending Library is the brainchild of Beltway Public Works (BPW)—Natalie Campbell, James Huckenpahler, Patrick McDonough, and José Ruiz—who consider art as a civic resource. With the Lending Library project, their goal is to get “challenging and inventive” artworks into environments where people might not otherwise get the opportunity to engage with contemporary art. The work is on loan for free, and unlike a library book that has to be returned in a few weeks, the artwork is on loan for a few months.

It’s not a new idea, per se. There are a variety of programs across the globe that have served as inspiration for Beltway Public Works. The Minneapolis Art Lending Library, now in its 4th year, serves as one such example. So too does the program at Oberlin College, albeit imperfectly. Oberlin actually rents work to people with Oberlin IDs, at a cost of $5 per piece per semester. (Even then, art rental wouldn’t be new to D.C.: in the 1950s and '60s there was once a business called The Art Rental Gallery.)

Like any decent idea in D.C., it’s fraught with bureaucratic challenges. There’s the question of how to insure works loaned through the library. It’s free for now, but is that sustainable? With a small collection, the Beltway Public Works crew is happy to install the work, but what happens if the collection gets bigger? And there’s the matter of nurturing an audience to become lenders, as well as finding the artists to lend. It’s enough to become cynical of the whole enterprise.

Fortunately cynicism is in check. Artists are lending work. People are lining up to borrow. It’s an exhibition worth checking out. So too is the work on display.

Image: Wesley Clark's Which Game We Playin' on loan at Bread for the City