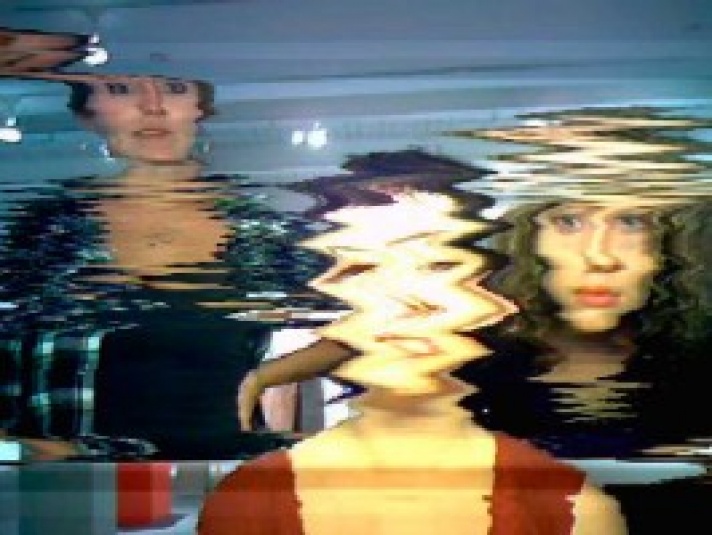 Max Kazemzadeh, one of the curators, explains, “DIWO is ‘Do It With Others,’ taking on this notion of DIY – tinker, hack, investigate -- and then do it with others collaboratively, get other people involved, maybe from different disciplines, and come together and build something. The second, ‘O,’ is for open source. All this stuff is open source because when you’re hacking something are you developing it for commercial use? Not so much.”

In explaining why he included LMFAO, Kazemzadah says, “It about young people. They really need to get into this now, and they’re really creating a new language on some level. It also connotes a certain irreverence.”

As for LHOOQ, the reference to Marcel Duchamp’s iconic “readymade” work consisting of a postcard of the Mona Lisa defaced with a moustache and goatee, Kazemzadeh sees Duchamp as a seminal figure in the development of works like those in the exhibition. “I think that he represents a playful culture hacker, but also someone who was really integrated multidisciplinarity into the systems of math, science, and art. I really believe a lot of those things have to be inside of the mind of the artist who’s working with technology and experimental media,” he says.

But as is often true, there’s an even deeper layer of meaning. “We had all these acronyms,” says Kazemzadeh, “and I thought it would be really funny if we fit it all into an acronym. D.O.L.L. refers back to Mona Lisa, but also to the fact that a lot of these things that we’re building have intelligences of their own, and we want to interact with them the same way a child plays with a doll and interacts with a doll as a friend. They play and they move them and sit them down and drink tea with them.”

Jonah Brucker-Cohen, a fellow veteran of the burgeoning art and technology community, and Kazemzadeh’s co-curator for this project, takes a simpler tack in explaining the show. “It’s mainly just about looking at how technology has evolved, where we see it going, how artists are using technology to challenge media and reality in general,” he says. “I want people to think about design and creative production. I want them seeing the world through technology, through a different manifestation and creative angle. Looking at how to challenge and assumptions about the real world through technology. The projects give you a look at what’s happening now, but also a glimpse of what might be possible in the future. This is not the end all and be all of technology and art shows, but it’s a good collection, and it will make people discover what the potential of technology is.”

“This isn’t a thrill ride,” says Kazemzadeh of the exhibition. “There aren’t any activist projects. These are individuals that may be working collaboratively, but the iconography -- it’s a more personal experience. This one is a little bit more abstract. I feel like it’s a really exciting grouping of work.” And indeed two of the works that will be shown have a very human component to them – Michelle Lisa Herman’s The Social Network (which was originally shown as part of WPA’s Coup d’Espace program) and Patrick Resing’sHugg #1, a hugging robot.

Although previously a showcase of video works, this year WPA has expanded the Experimental Media series with an exhibition at Artisphere and a series of workshops by HacDC. The three platforms work together as an exploration of the impact of technology on our culture and ourselves.

“It’s going to be a quite diverse array of experiences,” says Kazemzadeh. “The title of the D.O.L.L. show refers to different ways that things can be encoded. In the same way you have the video screening, which is a different experience from the exhibition. It’s passive. You sit. It’s cinematic, you’re watching, it’s linear. And then you have the really hands on workshops, where you absorb, and go home with information, new perspective, and a tool to be able to build.”

Though this is Kazemzadeh’s and Brucker-Cohen’s first formal collaboration together as curators, the two have, in fact, been moving in the same circles for years, both paralleling and intersecting at odd points. Both men first became interested in the application of computer technology to art late in their college days. Both did their graduate studies in New York – Brucker-Cohen at NYU, Kazemzadeh at Parsons. Brucker-Cohen blogged about one of Kazemzadeh’s projects, sun.dial. Kazemzadeh curated Brucker-Cohen into an art and technology conference in Texas. Ironically, the men hadn’t actually met until six months ago. “I have the most respect for Jonah and I feel really lucky to have him co-curate the show. I’ve always been a fan of his work,” says Kazemzadeh.

Brucker-Cohen is equally enthusiastic about his experience. “This is one of the first major shows that I’ve curated. I’ve curated a bunch of other smaller, mainly video shows, and some installation. I’m from Washington , so it’s kind of exciting to be involved in something here. I grew up in Dupont Circle.”

Kazemzadeh, too, is eager to see the impact of the show. “I think the practice of art in general, especially when it comes from a non-commercial context, like WPA, is focused towards humanitarian pursuits. You come away with the aura of share, care, lift up, participate, join your community, socialize, love your neighbor, connect,” he says. “it’s probably one of the best curating things that I’ve ever been involved in, in my opinion.”