A meme come true: Laser Cat, a giant cat head that shoots lasers and art, is ready to rock D.C. 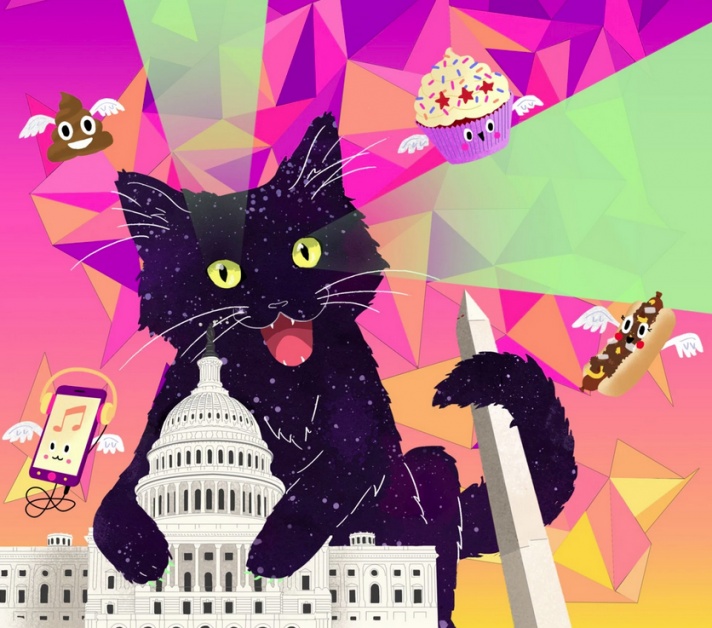 Imagine a world where Internet memes have crossed over into real life. The forecast: cloudy with a chance of double rainbows. A surprise Rick Astley appearance has brought Beltway traffic to a standstill, and Metro is facing delays as well, due to nasty honey badgers on the tracks.

Barcelona, Spain-based artists Killian Cooper and Dave Glass are bringing this dream closer to reality with a dance party starring Laser Cat, a 21-foot inflatable cat head that shoots lasers from its eyes, inspired by the Internet meme. The event, which is sponsored by the Washington Project for the Arts and Forest City, takes place Friday and Saturday, in a Yards Park warehouse. Assuming his creators make it through customs, that is.

“When a very serious customs agent asks, ‘What’s in the bag?’ and you answer, ‘Oh, it’s a laser cat,’ it usually leads to more questions and you being pointed into a little room,” Glass says.

Customs needn’t worry. Laser Cat is not a threat to anyone; he’s a global arts advocate. Since his debut in April, at a Miami arts festival, Laser Cat has hosted events in Barcelona, Calgary, Canada, and Brooklyn.

Cooper and Glass, collectively known as Hungry Castle, specialize in bringing online absurdities to the real world. Past projects include a giant, inflatable Lionel Richie head that people could crawl into and a huge Big Bird sculpture that dropped plush emoji-poop onto passersby.

“We’re all about creating these remarkable experiences that people engage in and create their own story and interpretation to share with the world,” Glass says.

Laser Cat, the dance party, “started as an alternative format for showcasing art,” Glass says. Instead of hanging works in a gallery, the cat head projects photos of art onto a screen or wall. And adds lasers.

Since Laser Cat’s debut, more than 15,000 people have submitted their work. Some 260 local artists sent in submissions for the D.C. event, and Laser Cat will showcase his favorite 50 to a thumping soundtrack provided by local DJs, such as Thievery Corporation’s Eric Hilton.

“He eats all kinds of art, from photography to illustration to pottery,” Glass says. “The only thing he doesn’t eat are advertisements. He spits them right out. They give him gas.”

Laser Cat chose 50 local artists to highlight at his shows Friday and Saturday. Here are a few of his favorites: Artistic inspiration: “It’s a playful commentary on sex and attraction.”

Artistic inspiration: “It was the laser cat skit on ‘Saturday Night Live’ that triggered the idea, and I had already painted some space posters.” Artistic inspiration: “When I made my first Tense Cat in 1998, I was working full time at a law firm and was very tense myself.”

Laser Cat says: “I love the colors. It reminds me of ‘Wallace and Gromit’ — pew pew!”

Artistic inspiration: “For me, it’s about drawing clean lines and shapes and creating a visual language.”