A Monument to the Un-Monumental: 5 x 5 Arrives 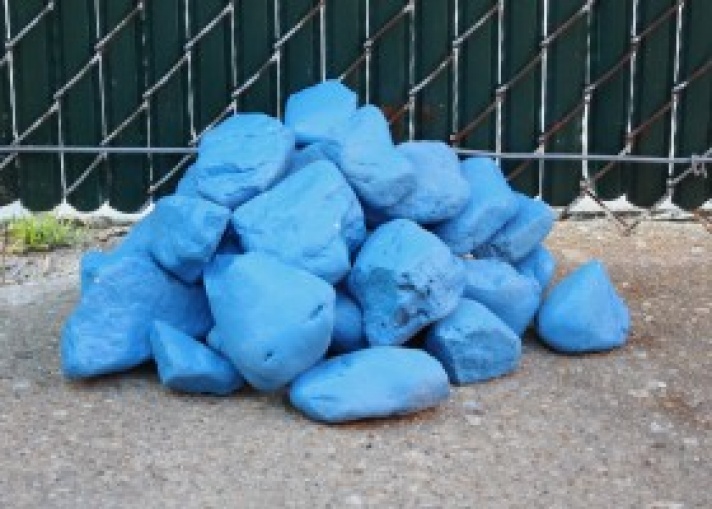 When local independent curator Laura Roulet was applying to participate in the DC Commission on the Arts and Humanities’ The 5 x 5 Project, she wanted to make sure that her focus was on local artists. “I’m based in Washington,” she says. “I’ve been here about 15 years, so I know a lot of talented local artists and I wanted to put together a proposal that would include them. I ended up as the only local curator.”

She also wanted to use her project, entitled Activate ==> Participate to challenge the traditional “dead generals on horseback cast in bronze” approach to public art that is so pervasive in the District. “I think all of the 5 x 5 projects are breaking out of conventional notions of what public sculpture is. Washington has plenty of monuments already so it’s ‘un-monumental,’” she explains.

And all of the five projects in Laura Roulet’s presentation for The 5 x 5 Project, like all of the projects created by the five curators, challenge the notion of permanent, fixed, object-based artwork. Roulet’s fascination is with participation – all of the works, from Ben Ashworth’s Finding a Line (which will transform a highway underpass into a skateboard park next to Garfield Park), to Wilmer Wilson’s performance piece Henry ‘Box’ Brown: FOREVER (in which Wilson will cover himself in postage stamps and attempt to mail himself to freedom), to The Floating Lab Collective’s ReMuseum (which explores ideas about the collection, valuation, and display of objects from the inside of a retrofitted taco truck), to Charles Juhasz-Alvarado’s The Cherry Blossom Cloud (a temporary sound sculpture that can be played like a xylophone) require community involvement in order to be fully realized.

But if your objective is to take a contrasting approach to a three-ton bronze statue mounted on a block of granite, there is probably no more radical way to do that than creating a public art project out of piles of small, brightly painted rocks. And when Laura Roulet selected local artist Patrick McDonough to be one of her five artists, that is exactly what he proposed, titling his project Painted Rock Hunt Game. “It is a riff on scavenger hunts and geocaching, and as someone pointed out during this time of year, Easter-egg hunts,” says McDonough. “I am putting a pile of painted rocks in eight sites in the city, one in each Ward. And on the bottom of each rock will be a letter, number or special character.”

Looking around his studio in Northeast DC at the piles of rocks, one has to admit that the comparison to Easter eggs is apt. “If you stumble upon a pile and you’re playing or even if you are simply intrigued by these lime green rocks on the side of the road or wherever they may be, you can take one,” he continues. “And ideally people will play the full game by collecting a rock from all eight piles, in which case you will get a password with all eight characters and then on the website, (www.prhg.net) there will be a prompt for this password, which if entered correctly results in my sending you a prize.”

His intent, he explains, was to turn the entire District, all eight wards, into a giant game that could be “played” by residents and tourists alike. “The password is a way to incentivize people to go to all eight places and so it’s a way of ‘game-i-fying’ the city basically, and hopefully moving people around to places that they wouldn’t ordinarily go. And because you don’t know where the painted rocks are, they could be anywhere, so it really colors the day to day moving through the city.”

“There’s an element of ‘kid-like-ness,’” McDonough explains. “Painting a rock is on its face, a pretty ridiculous thing for a practicing artist to do, but I like that. I like that sort of freedom. I like the phrase ‘free time’ because it encapsulates play and leisure and recreation but it’s also the word ‘free’ – it’s adults behaving like kids and that is something that is really interesting to me. Sending adults on a scavenger hunt for free painted rocks is pretty silly, but in a really good way.”

But the candy-colored, childlike exterior of the game carries within it interesting meditations concerning who can play the game, how they play, and who will ultimately be successful at it. “We think of public space as being the outside and the exterior, but the Internet is pretty public,” McDonough continues. “And that’s where I think some of the decisions for this project came from. How does the Internet and its way of communicating start to interlace with the physical manifestation?”

And even though McDonough included an Internet component to this game, he is acutely aware of the divide (often based on economic means) between the “wired” world and the “unwired” world. “That’s where the SMS came in, because my first meeting with my web designer we decided let’s write this for smartphones, because even if you don’t have the Internet at home, it’s pretty likely that you have it on your phone, but even if you don’t have Internet on your phone, you can still play this game via SMS.”

Even McDonough concedes, however, that a line must be drawn, and maybe that’s the point. “Not everyone can play the game, but you can’t possibly make something for absolutely everyone.” he admits. “I hope that the fact that there are relatively legible limits actually becomes a way to talk about access and who art is for, even if it’s public art.” There is also the fact that the game challenges individuals to travel throughout the whole city, instead of limiting their movement only to those neighborhoods and areas where they feel comfortable, adding a necessity for not only access, but effort by the participant in order to “win.”

Although not everyone can play Painted Rock Hunt Game, the fact that its interactivity extends in so many different directions is part of why Roulet was so attracted to it. “I think of the Washington public as different circles that don’t always overlap, so I hope that this will work as a sort of Venn diagram bringing some of those circles together. A piece like Patrick’s, which is a geocaching project, reaches out to two different communities – people who do geogcaching, and the art community, which includes people who are aware of him as an important local artist,” Roulet says. “I’m hoping that people will really engage with all the pieces and it will really take them to a place they’ve never been.”

When you’re talking about a public art endeavor like The 5 x 5 Project, that is largely based on temporal and ephemeral projects, it is only natural to begin wondering what, if anything, will remain when it’s over. “I hope that the DC Commission will continue to approach public art in a similar way. It can be something very ephemeral, and to look more to new media instead of in terms of just creating an object,” Roulet says.

As far as advice to other artists who want to take up a public art practice? “Well, you can always just do it,” says McDonough. “You can make something and put it outside, and I know in DC there’s this sort of cloud of bureaucracy and security, but that seems in my mind almost exclusive to Capitol Hill and Northwest (DC). I could put something in that lot behind my studio and no one would care for months. Or you could put it outside for an hour, and see what happened.”

“I know what they say, you can’t get an opportunity until you have the experience but you can’t get the experience until you have the opportunity,” McDonough continues. “I think it depends on what sort of public art you’re interested in. Because maybe you can’t put a ten ton bronze somewhere without having made a ten ton bronze before, but if that’s not what you want to do, there’s lots of other ways to wiggle your way in.”

As for the future of public art in DC, Ms. Roulet already has plans underway for that, in the form of being the curator for the third Foggy Bottom Outdoor Sculpture Show, which has been titled Sculpting Outside the Lines. The show, which opens April 21st and runs until October, will again push the boundaries of conventional outdoor sculpture, including a projection piece by Jefferson Pinder, a mobile garden by Lina Vargas De La Hoz, and large scale works by both Dalya Luttwak and Barbara Liotta that will hang from a building. “I’m including some conventional sculptures, but I also wanted work that’s kind of hidden, that you would have to seek out and that isn’t necessarily in the front yard, but might be attached to the roof or on the façade,” explains Roulet. Roulet is also hoping to include pieces from Dan Steinhilber’s Cast Angels project, which he created while a resident in WPA’s PAR program, which allows a DC artist to have a public art residency at Socrates Sculpture Park.

McDonough, also a veteran of WPA’s PAR program, hopes that more artists will start seeing themselves as public artists. “Why does art continue to perpetuate itself? That line of thinking has always made me challenge myself in terms of casting a wide net in terms of what I’m up to. So at some point I became interested in working outside the gallery space as well. But it also became necessary to what my whole practice is about or a lot of what I think about. I don’t want to say every artist should work in the public realm, but it seems pretty necessary in 2012 to think about why you wouldn’t.”

Patrick McDonough’s “Painted Rock Hunt Game” may be played by visitingwww.prhg.net. More information about “The 5x5 Project” is available atwww.the5x5project.com. Beginning April 21, 2012, the “Foggy Bottom Outdoor Sculpture Exhibit” can be seen in the yards of homes and businesses between 24th and 26th streets NW and H and K streets.