Now More Than Ever reviewed in Washington City Paper 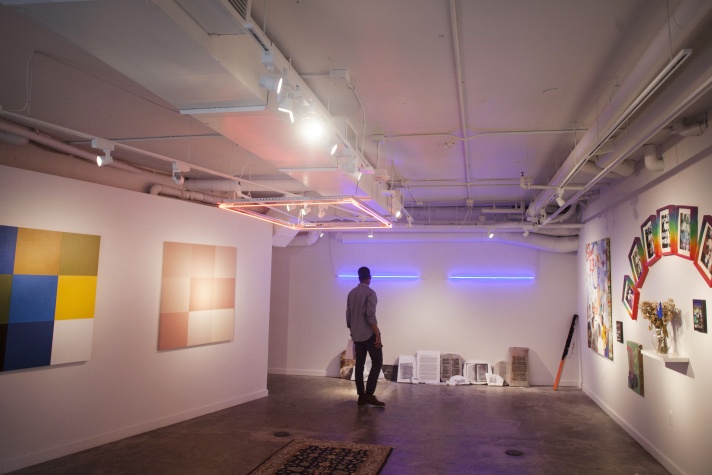 At the Washington Project for the Arts, NoMüNoMü Confronts The Current Sociopolitical Climate

Published in the Washington City Paper on May 12, 2017

Give credit where it’s due: NoMüNoMü has taken over the art scene. The brainchild of artists Joseph Orzal and Nora Mueller, the scrappy collective—or is it a brand?—got its start a few years back with some one-off outings at unofficial spaces. Their contributions to area shows have only grown since then. A dozen or more efforts later, including a spoof of museums at Transformer, Now More Than Ever is NoMüNoMü’s most official project yet. That’s a mixed blessing.

Now More Than Ever is ultimately a straightforward group show at Washington Project for the Arts by a bunch of like-minded artists who are sick of it all. It’s one of just a handful of D.C. art shows to thematically confront President Donald Trump’s election, or rather, (less) specifically, the sentiments that swept him into office. Ani Bradberry’s “Loom” (2017), for example—a rectangular neon form suspended over a rug of the same shape on the ground—suggests the noumenal potential of a faith that the Trump administration is struggling to travel-ban out of the United States entirely.

Similarly subtle, Billy Colbert’s “Psalm Before the Storm” (2016) is a handsome, protest-driven Pop Art painting. Its atmospheric backdrop suggests clouds of tear gas, a floral print, and a silhouette of rowhouses all at once; in the foreground, scattered black demonstrators struggle against an unseen antagonist. Snippets of postcard text appear superimposed over the painting (“Save ⅔,” “850,” and “BUY LEMONS”), as does the incongruous figure of a marching-band drummer—juxtapositions that gesture at a critique of neoliberalism or late capitalism or something trendy like that. But Colbert’s punchy painting holds back, stopping just short of being didactic.

Not so with several other works in the show. There’s Justin Poppe’s “Never Had a Chance To Grow” (2017), a bouquet of pale white flowers in which a flag, planted like a greeting card, reads “City of Flint Water Dep’t.” Okay—straightforward. Same goes with Orzal’s “TL;DR” (2017), a sculptural installation of granite tombstones screenprinted with racist D.C. housing ads from yesteryear for white-only homes. Check—got it.

It’s not that these subjects aren’t infuriating. They are, of course. And it’s a surprise—astonishing, really—that the recent rise of fascist politics in the U.S. hasn’t been met with more direct resistance from the local art world. Fascists were deliberate and cruel about their persecution of D.C. artists during Pizzagate, after all (which continues!). The one other such confrontational show that comes to mind is Perversion Therapy, an exhibit by Eames Armstrong and John Moletress at Flashpoint in January that thumbed its nose (and other parts) at the prurience of Vice President Mike Pence and his righteous cohort. Otherwise, Orzal has been staging a lonely protest.

In political art, the line between protest art and propaganda is a thin one. In Now More Than Ever, too many works fall on one side of the line—or they appear in the gallery when they belong in the street. Adrienne Gaither’s “I Don’t See Color” (2016), a simple grid painting of different shades of white skin, is a solid painterly send-up of the faux post-racial ideology that attends any #AllLivesMatter conversation. Her collages of protest photos with protest texts, on the other hand, don’t belong mounted to sintra and plexiglass on the gallery wall. These are flyers that would benefit from the charge of a public rally.

Now More Than Ever is a rallying cry that, in my own limited lifetime, harkens back as far as the launch of the Iraq War in 2003. Then as now, the question of what art could do loomed over everything. At that time, Richard Serra had an answer: In 2004, he produced a crayon lithograph, a horrifying silhouette of an Abu Ghraib prisoner. Over the figure’s head appear the words “STOP BUSH.” Serra’s powerful piece later made its way into the Whitney Biennial. It didn’t fit there.

No one expects Orzal’s adventure club to reconcile all the tensions between activism and artwork in the art world. Now More Than Ever is a good sampling of local agitation, if a little on the nose. In one respect, though, NoMüNoMü has achieved something most group shows—most groups period—fail to do: Every NoMüNoMü show strives for racial inclusion among artists. The message matters, but so does the messenger. That’s just as true in the galleries as it in is protests. Working under the banner of NoMüNoMü, younger artists are turning goals into a reality. Inclusion alone might not be enough to satisfy NoMüNoMü, but in the context of the art world? That’s plenty enough to start.