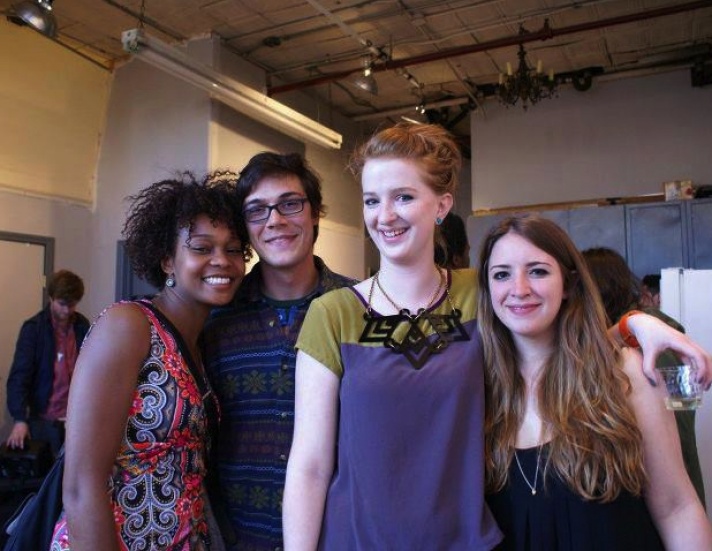 Washington artists have, on paper at least, benefitted from the region’s economic stability during the national recession. Government jobs and an educated, highly skilled labor pool, in addition to regional tech and science industries, are a few cited reasons for a local stability and a slow, but present predicted growth. Buzzwords like “urban renaissance” have routinely been used to describe DC’s cultural scene and continued development projects. If this is indeed a reality, how does it affect artists and creatives in the region?

It is easy to imagine some ways artists benefit directly from economic stability: an audience and public with money to spend, regional art supporters and their sustained ability to collect, and a diversity in occupations that artists may take outside of the studio. And when the stakes aren’t life or death economically, and in a climate that suggests a decent level of available resources, it follows that unconventional experiments in culture making take place.

Enter the pop-up event. Washington has seen an explosion of pop-up style events in the past several years, due in part to this certain degree of stability in the city that allows for experimentation and growth. Eames Armstrong recently opened an exhibition co-curated by her own curatorial initiative Aether Art Projects and developing group 229Collective. Her interest in the style of event came from a desire to learn and experiment in new ways of working in the arts. “I wanted to experiment more in curating, and by initiating and realizing shows independently from institutions I had the freedom to be in control of the end result and the ability to create casual low-pressure environments. Inspired by programs like Mariah Johnson's Porch Projects and hoping to connect with more artists and art collectives, programming alternative spaces seemed quite obvious.”

Amy Braden, Director and Co-founder of 229Collective sees the prominence of these events as a result of a direct, palpable need, “I would attribute the growth to artists and art activists stepping in to fill the void in our community. Institutions and businesses especially, have little time for emerging artists, new forms of expression, basically anything that is unfamiliar to them and the way thing have been done before. Of course there are exceptions, but I think in general, perhaps we are just realizing that we don't have to beg at the doors of established institutions to accomplish our goals and further our ideas,” says Braden. Emma Fisher of The Fridge DC took her own project and fashion platform PLEATHERETTE to #DCRESIDENCE @DCWEEK which was a two venue pop-up art space devoted to creative entrepreneurs during DC Week 2011. She attributes a confluence of influences to the success of entrepreneurial one-offs in the District. “I think that pop-up events are a natural outgrowth of the democratization of our culture. It's a flat playing field now, and everyone is DIY. We no longer need these gatekeepers - gallery owners, art critics, et cetera - who used to make or break people. We can all do our own thing and get positive recognition for it. I also think that DC is hungry for art and creativity. When Obama came in, DC took on a new face, a new outlook, and creative entrepreneurs came out of the woodwork to feed into that. The traditional infrastructure for emerging artists is limited, so we began to make our own spaces to meet a demand. And the DC government deserves props for being willing to support and foster these spaces and events.”

It is true that these events open the doors for artists and many go on to more traditional or expected career moments as a result of increased exposure. But, as these initiatives are often by-artists-for-artists, the question of how they are received and integrated into the community at large looms. Fisher continues, “With both of our pop-up spaces, we were delightfully surprised by how welcoming and interested the communities were. I mean, here we are, installing 15 decaying, vintage department store mannequins on Bladensburg Road for #DCRESIDENCE…how would that be received? Really well, it turns out. Art and creativity are primary driving forces in the revitalization of neighborhoods.” With both artists and the local government behind this philosophy, and an eager public, Washington seems primed to galvanize its role as an incubator for culture and the arts.

Aether Art Projects will present the exhibition SCANTRON with artist group YouGotGot at 87 Florida, opening August 18 from 6:00-9:00pm. Click here for details. Stay up to date with the latest in DC art events with WPA's newsletter Projector and with a WPA Membership. For questions or to become a member, contact WPA Membership Manager at 202-234-7103.