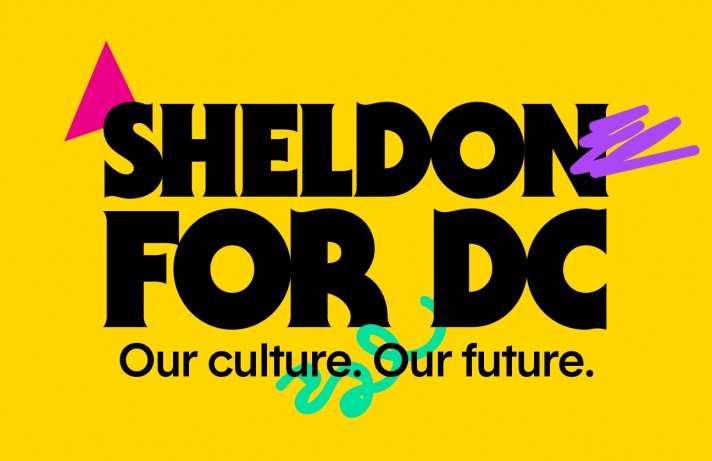 September 9, 2016 (Washington, DC) – Washington Project for the Arts (WPA) is pleased to announce SHELDON FOR DC, a public art performance directed by the artist Sheldon Scott. The citywide performance revolves around the campaign of a candidate -- referred to simply as "Sheldon" and played by a half-dozen actors -- who is running to become DC's first Minister of Culture. It will unfold over the next two months in the form of rallies, door-to-door campaigning, meet-the-candidate social events, and an 8-Ward whistle-stop tour.

“This is a campaign with a real agenda, which is, simply put, about putting artists first in the policies that impact our city’s culture,” says Peter Nesbett, WPA’s executive director and Sheldon’s Campaign Manager. “That is why it is so well aligned with WPA’s interests. It doesn’t much matter that the office of Minister of Culture doesn’t yet exist.”

SHELDON FOR DC promises a brighter, more creative future for DC. The campaign seeks to unite and rally hundreds of actors, artists, dancers, designers, musicians, and writers into a potent, vocal, political force. If it achieves this, SHELDON FOR DC could become a movement, with a life that extends well beyond this election cycle. If it doesn't, it will be understood, retrospectively, as an episodic piece of performance art.

The campaign kicks off with a rally at The Big Chair in Anacostia on Saturday, September 17, from12:00 to 1:00 p.m. Additional events can be found on the campaign website at www.sheldon4dc.org.

Situating a project like SHELDON FOR DC within the history of art is not a particularly easy task. Few visual artists have held political office in the U.S. since the painter George Caleb Bingham was elected to the Missouri legislature in 1848. Ad Reinhardt famously ran and lost in the race for New York City mayor in the 1930s, as did Patrick Brill (aka Bob & Roberta Smith), who ran for Parliament in London in 2014. But this project, with its fictitious basis, obviously isn't about winning or losing an election. Instead, it is about mobilizing a constituency. It is about listening and giving voice to DC's artist community, imagining a city where artists have a seat at the table in local government and cultural planning, and forging a vision for DC culture in the future.

For that reason, WPA is complementing the campaign-performance with events that reflect on the relationship of art and politics:

Kate McGraw on How to Run for Political Office
Thursday, September 22, 6:30 p.m.

Artist and former DC resident Kate McGraw is running as an Independent for the Pennsylvania House of Representatives. Come learn what Kate has picked up along the way, how being an artist has informed her political thinking, and how you too might start your own campaign.

Born in Carlisle, Pennsylvania, Kate McGraw earned a BFA from Penn State University and a MFA from CUNY Brooklyn College. She has exhibited at Curator's Office, Washington, DC; Katzen Art Center, Washington, DC; Zentral Bibliothek of Zurich, Switzerland; among other venues; and has received grants from DC Commission on the Arts and Humanities and the Morris & Gwendolyn Cafritz Foundation. McGraw currently works to give voice to sustainable agricultural issues and animal welfare awareness in the arts.

Curator of contemporary design at Cooper-Hewitt, National Design Museum in New York City, and director of the Graphic Design MFA program at Maryland Institute College of Art (MICA) in Baltimore, Ellen Lupton is one of the pre-eminent design curators and editors in the U.S. Join us for an evening on the history of campaign identity design. She will be joined by Christian Dutilh, co-designer of the SHELDON FOR DC platform.

Ellen Lupton is 2007 recipient of the AIGA Gold Medal, one of the highest honors given to a graphic designer or design educator in the U.S. Her publications include Thinking with Type (2004), Design Your Life: The Pleasures and Perils of Everyday Things (2009), and Graphic Design Thinking (2011).

Christian Dutilh is Principal of Composite Co., a branding and design studio.

For more information on these events and SHELDON FOR DC, please visit www.wpadc.org.

Press inquiries should be directed to Jeremy Flick, Deputy Director, Marketing and Operations at jflick@wpadc.org.

Sheldon Scott, a native of Pawley’s Island, SC, received his B.S. in Psychology from Francis Marion University in Florence, SC. He began his career in Social Work as a Unit Director for the Boys & Girls Club of Horry County, SC. Upon moving to the Washington DC area, he joined a private practice, specializing in Mental Health, Substance Abuse and Sex-Offender treatment at Northern Virginia Counseling Group.

After years as a practicing Psychotherapist, he began a creative life as a Storyteller, Artist, Actor, and Writer in 2005. He has since performed four sold-out solo storytelling shows in the Capital Fringe Theatre Festival and various venues including Busboys & Poets, and the Hirshhorn Museum. He has exhibited his Fine-Arts and Performance Art works at (e)merge art fair, WPA Select Auction, Arlington Arts Center, Delaware State University and Art Miami. He is represented by ConnerSmith Contemporary Gallery for his Fine-Art work. His upcoming book project, a memoir, “Shrimp & Griots”, is based on his storytelling narratives of the same name. Howard Yoon of Ross & Yoon Literary Agency represents Scott’s written works.

Sheldon recently worked as the Chief Marketing Officer and Director Of Operations of ESL Management Group, which includes such restaurants and bars as Marvin, The Gibson, Patty Boom Boom, Den of Thieves, Chez Billy and The Brixton et. al. He also served as the District of Columbia’s Advisory Neighborhood Commissioner of Single-Member District 1A03 (2010-2012) in Columbia Heights, and sits on the boards of the Youth Pride Alliance, Teaching For Change and StepAfrika.

Washington Project for the Arts (WPA) serves as a catalyst for the creation, critique, and collection of contemporary art. With more than 800 artist members, we are the only DC-area organization to support visual artists at all stages of their careers.

WPA was founded in 1975 by the art impresario Alice Denney. Since then, WPA has presented more than 500 exhibitions; 1,000 performances; 700 lectures, workshops, and symposia; 250 screenings; and 58 public art projects. Nearly every major visual artist in the District between 1975 and today has had some connection with WPA. Many have sat on WPA’s Board of Directors, including William Christenberry, Gene Davis, Sherman Fleming, Sam Gilliam, Martha Jackson-Jarvis, and Maida Withers. Walter Hopps, the legendary curator, was also a board member.

In November 2015, WPA opened a new street- level gallery space in North Shaw, a block from Howard University and around the corner from the 9:30 Club. The gallery is open six days per week and regularly hosts exhibitions, talks, performances, screenings, and special events.