WPA Speaks with Julie Wolfe about her “South Capitol Skyscape”

Perhaps you were recently driving or walking down South Capitol Street to go to a Washington Nationals game, or perhaps to attend WPA’s SynchroSwim or one of the Capitol Skyline Hotel’s summer pool parties. You probably noticed that the facade of the hotel has recently been given a facelift with the installation of a 50 foot tall public art project, WPA’s South Capitol Skyscape.

“I have loved working on the project,” artist Julie Wolfe stated when WPA recently met with her in her Capitol Hill studio to learn more about  her work and her project Meta 1, the first featured South Capitol Skyscape project.  “I had not worked with WPA…It’s amazing how much stuff you do.  You guys seem to be in touch with so many different artists…You give them a chance to show the work and that sort of thing, thinking about the artwork can engage the community and the public. “ 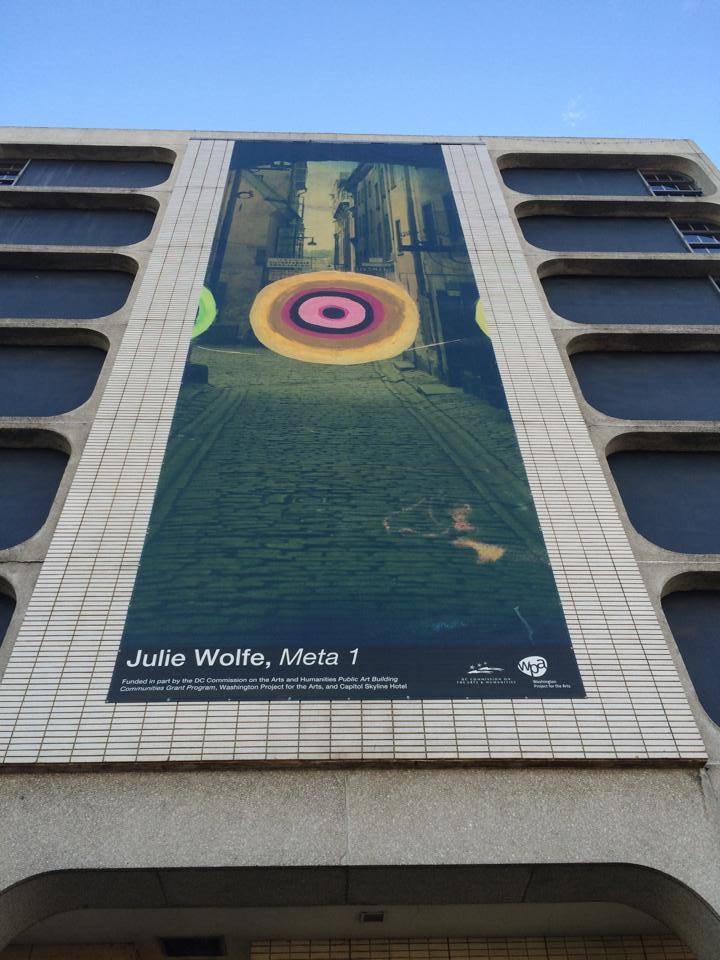 Though Julie’s work typically has been produced for traditional “white-cube” spaces, Julie says she has “become more a fan of, not so much of the commercial gallery and the sales of art, but just getting art out there for people to see.  Any alternative spaces, public art, or whatever so more people can enjoy it and see it.”  As to why she wanted to participate in the project, Julie happily expressed, “the scale of it, you know? And, the fact that it’s a public art piece, which I haven’t done much of and that I think is so important.  But mostly the scale and a chance to work with WPA.”

Julie had considered many options when we approached her several months ago about participating in the project, but using an “already existing piece just seemed to work…Its part of a series from 2014 called Meta,” Julie describes.

The way it started was I found an estate of old photographs that were taken in the 70s by an old couple that travelled all over the world.  Wherever they went they would take these photographs of landscapes and architecture.  There weren’t many figurative photographs. These are from the 60s and 70s and you can tell by the process of development because to develop photographs that large at that time, the inks they used weren’t archival, a lot of the reds would fade out of these images…thats what caught my eye…

Incorporating found materials, photographs, and texts to which she imposes “symbols and a “visual vocabulary of codes” Julie’s primary concern is “with aesthetics as much as…the message of the work…always something intuitive, not something I think about. It just happens.”

In referring specifically to her Meta series, Julie recalls:

I started doing these pieces where theres this spatial illusion happening; background and foreground in dialogue with each other or how they relate to one another.  Some of them would just have these graphic shapes on the foreground – the surface of the painting – and the background would be one of those images.  The shapes related more in an intuitive, abstract way to what was going on in the background…with photographs and other works on paper, it’s not the subject matter that I am drawn to, it’s the aesthetics of the pieces of the material…I try not to destroy things, to keep them as is…I like the idea of change and passage of time.

Artist Julie Wolfe in her studio

It is this approach to offer a “broad reference to historical things,” that Julie brought to her South Capitol Skyscape installation.

I didn’t necessarily intend this,” she continues, “but the series of photographs is about travel and I think of the Captiol Skyline with its “traveling” connection.  It sort goes with that idea of world travel, using photographs as a way to record memories of travelling.” There is a reference to “change and movement and how each symbol (both the photographic image and the hotel itself) is connected to other ones…abstract arrangements and how they influence one another…I didn’t realize it until it was up on the building just how much depth it had and just seemed to really work well in that way.  It just kinda plays on the landscape and the architecture, and the building.

When asked about the impact that the South Capitol Skyscape project has had on her work and practices, Julie explains:

Theres a huge difference in how I’ve been working…It influences your work once you seen it that big and seen the response.  That something very unexpected…In a year I have a solo show in Berlin which is going to be my main focus.  That’s where I worked this summer.  I had a studio there, took a lot of photographs, played around with them some and am going to paint on top of them in a looser way than I did with the Meta series. There is probably going to be some really, really large works on paper or canvas that I can roll…some sculptural pieces and some larger pieces on the wall…

“I hope people mostly realize the impact public art can make and it will catch their attention. I think its so important…Berlin has all these spaces and now its really cool, this!” Referring to the impact of the South Capitol Skyscape project, Julie continued:

It’s very much like what I was seeing in Berlin. People flock to it, not just the community but artists.  It builds a sort of excitement, among artists and all kinds of people…Art on a building can make everything look great, look better.  Now people are going to see the next one and then they will want to see the next one…it’s a benefit to create curiosity.  What what is this?  What are they doing this for?  You guys have put so much into this project; it’s so great and really nice. I think its great for the artists and great for WPA.

We are thrilled have been able to work with Julie as the first featured artist for South Capitol Skyscape and we appreciate her taking the time to speak with us about her experience with the project. Meta 1 will be on display through October 31, 2014.